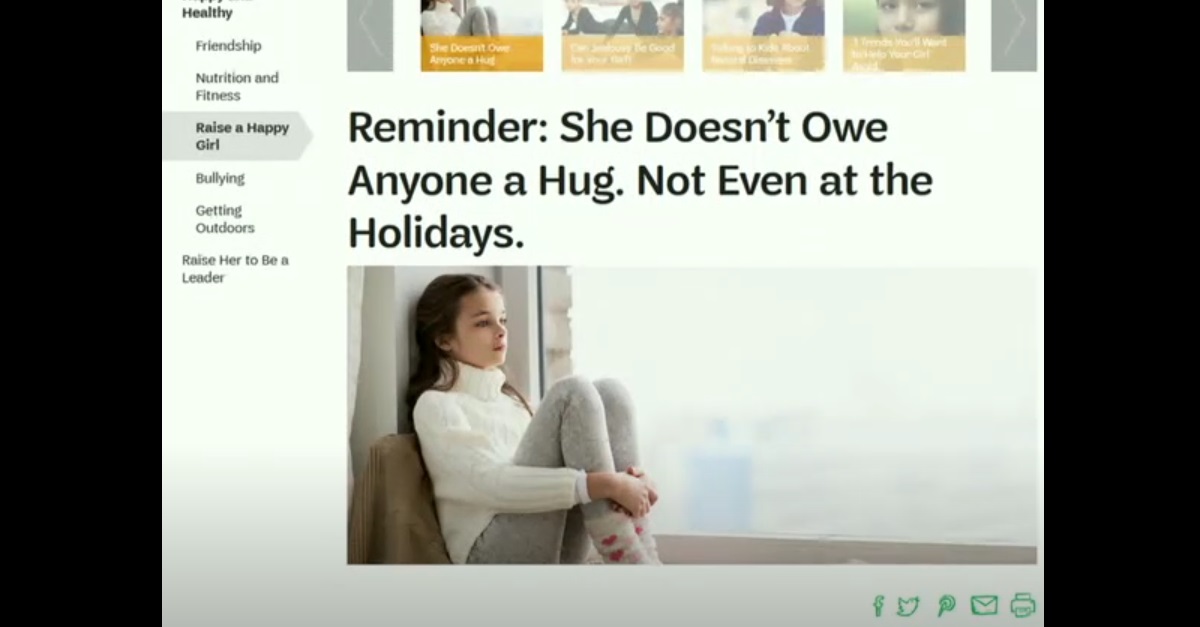 A new consent initiative from the Girl Scouts of America is drawing the fire of people who say the organization has gone too far and assumed too much about the long-term ramifications of the behavior of girls at a young age.

“Holidays and family get-togethers are a time for yummy food, sweet traditions, funny stories, and lots and lots of love,” begins the post, entitled “Reminder: She doesn’t owe anyone a hug. Not even at the holidays.”

RELATED: What he allegedly did near 10-year-old Girl Scouts at Walmart is just sick, sick, sick

“But they could, without you even realizing it, also be a time when your daughter gets the wrong idea about consent and physical affection,” the post continues. At its core, it’s about learning behavior in little girls that might come back to bite later and granting little girls autonomy, the organization says:

Telling your child that she owes someone a hug either just because she hasn’t seen this person in a while or because they gave her a gift can set the stage for her questioning whether she ‘owes’ another person any type of physical affection when they’ve bought her dinner or done something else seemingly nice for her later in life.

The Girl Scouts encourages families to “give your girl the space to decide when and how she wants to show affection.” It says that girls who want to show affection are more than welcome to, adding that “many children may naturally want to hug and kiss family members, friends, and neighbors, and that’s lovely—but if your daughter is reticent, don’t force her.”

The Girl Scouts post added: “Of course, this doesn’t give her license to be rude!”

In a statement provided to ABC News, the Girl Scouts confirms that the post was published in part because of the avalanche of sexual assault stories coming out about men in politics, media, Hollywood, and more.

“Given our expertise in healthy relationship development for girls, and in light of recent news stories about sexual harassment, we are proud to provide girls’ parents and caregivers with age-appropriate guidance to use when discussing this sensitive matter and other challenging topics, should they wish to do so,” the organization told ABC.

One Facebook user wrote “No girl is going to seriously think she has to get physical with a guy to be polite, just because she had to give Aunt Betty a hug at Christmas when she was little.” In a response, one user wrote “Actually some do. that’s the point,” while a second responded: “Children are condition[ed] to give and receive affection, even if they don’t consent to it. After years of this, it becomes difficult to say no to those affections later because they are told they have to do what the other person wants … It’s important to let children have autonomy and a say over their body. They get used to being able to say no, so they can say it later in life when it’s important.”