Part of Brian Laundrie’s notebook has been made public after a horrific nine-month timeline involving the murder of his fiancée, Gabby Petito. In the notebook, Laundrie confesses to the murder of Petito.

Laundrie and Petito were traveling cross-country to visit national parks. They were traveling in Petito’s conversion van. Petito’s mother reported her missing on September 11 after she stopped texting her regularly. The FBI opened up an investigation the following day, and that investigation has continued since.

Laundrie allegedly strangled Petito. Her body was found in the Spread Creek Dispersed Camping Area in the east side of Grand Tetons National Park, Wyoming. Coroners determined the cause of death as blunt trauma to the head and manual strangulation.

Laundrie used Petito’s cellphone to send text messages and then went into hiding. He then shot himself in the head in a nature reserve in North Port, Florida, close to his parent’s home. Dental records confirmed the identity of the remains as Laundries on October 21.

One day prior to the discovery of Laundrie’s remains, his parents found his backpack, a revolver, and his notebook. The FBI seized the items and recently made a portion of the notebook public.

The Laundrie family attorney, Steve Bertolino, provided a rough transcript of the confession. The pages end with Laundrie announcing he is killing himself.

Brian Entin of News Nation shows the entire 8 pages released by Bertolino on his Twitter feed.

“Gabby, I wish I was right at your side, I wish I could be talking to you right now. I’d be going through every memory we made, getting even more excited for the future. But [we] lost our future. I can’t [live] without you. I’ve lost every day we [could’ve] spent together, every holiday. I’ll never get to play with [illegible] again. Never go hiking with TJ. I loved you more than anything. I can’t bear to look at our photos, to recall great times because it is why I cannot go on. When I close my eyes, I will think of laughing on the roof of the van, falling asleep to the sight of [illegible] at the crystal geyser. I will always love you.”

“Gabby was the love of my life”

“If you were reading Gabs’ journal, looking at photos from our life together, flipping through old cards you wouldn’t want to live a day without her. Knowing that everyday you’ll wake up without her, you wouldn’t want to wake up. I’m sorry to everyone this will affect, Gabby was the love of my life, but I know [adored] by many. I’m so very sorry to her family because I love them. I’d [consider] her younger siblings my best of friends… I am sorry to my family, this [is] a shock to them as well a terrible grief.”

“They loved as much, if not more than me. A new daughter to my mother, an aunt to my nephews. Please do not make this harder for them, this [occurred] as an unexpected tragedy. Rushing back to our car trying to cross the streams of [illegible] before it got too dark to see, too cold. I hear a splash and a scream. I could barely see. I couldn’t find her for a moment, shouted her name. I found her breathing heavily, gasping [illegible.] She was freezing cold. [Illegible] the blazing hot national parks in Utah.”

“She was so thin, had already been freezing too long.”

“The temperature had dropped to freezing and she was soaking wet. I carried her as far as I could from the stream toward the car, stumbling, exhausted in shock, when my [illegible] and knew I couldn’t safely carry her. I started a fire and spooned her as close to the heat. She was so thin, had already been freezing too long. I couldn’t at the time realize that I should’ve started a fire first but I wanted her out of the cold back to the car. From where I started the fire I had no idea how far the car might be, only knew it was across the creek.”

“When I pulled Gabby out of the water, she couldn’t tell me what hurt. She had a small [bump] on her forehead that [eventually] got larger. Her feet hurt, her [wrist] hurt but she was freezing, shaking violently. While carrying her she continually made sounds of pain. Laying next to her she said little, [lapsing] between violent shakes, gasping in pain, begging for an end to her pain. She would fall asleep and I would shake her awake, fearing she shouldn’t close her eyes if she had a concussion.”

“I panicked, I was in shock”

“She would wake in pain, start her whole painful cycle again [illegible] furious that I was the one waking her. She wouldn’t let me try to cross the creek, thought like me that the fire would go out in her sleep and she’d freeze. I don’t know the extend of Gabby’s injuries, only that she was in extreme pain. I ended her life, I thought it was merciful, that it is what she wanted but I see now all the mistakes I made. I panicked, I was in shock. But from the moment I decided, took away her pain, I knew I couldn’t go on without her.”

“I rushed home to spend any time I had left with my family. I wanted to drive north and let James or TJ kill me but I wouldn’t want them to spend time in jail over my mistake, even though I’m sure they would have liked to. I am ending my life not because of a fear of punishment but rather because I can’t stand to live another day without her. I’ve lost our whole future together, every moment we could have [shared.] I’m sorry for everyone’s loss. Please do not make life harder for my family, they lost a son and a daughter. The most wonderful girl in the world. Gabby I’m sorry.”

“I have killed myself by this creek in the hopes that animals may tear me apart. That it may make some of her family happy.”

“Please pick up all of my things. Gabby hated people who litter.”

Pat Reilly, an attorney for Gabby Petito’s parents, alleges that Steve Bertolino cherry-picked the parts of the notebook made public. He says that a different scenario played out and that Bertolino was trying to garner sympathy for the late Brian Laundrie.

The FBI initially released the notebook to both parties’ attorneys. 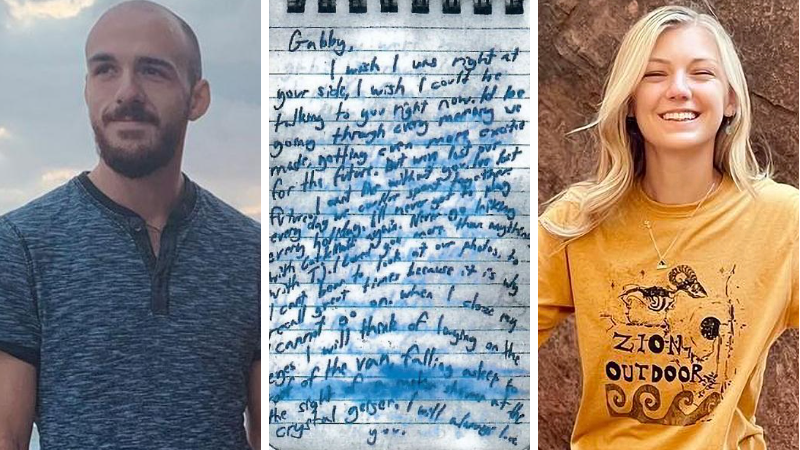