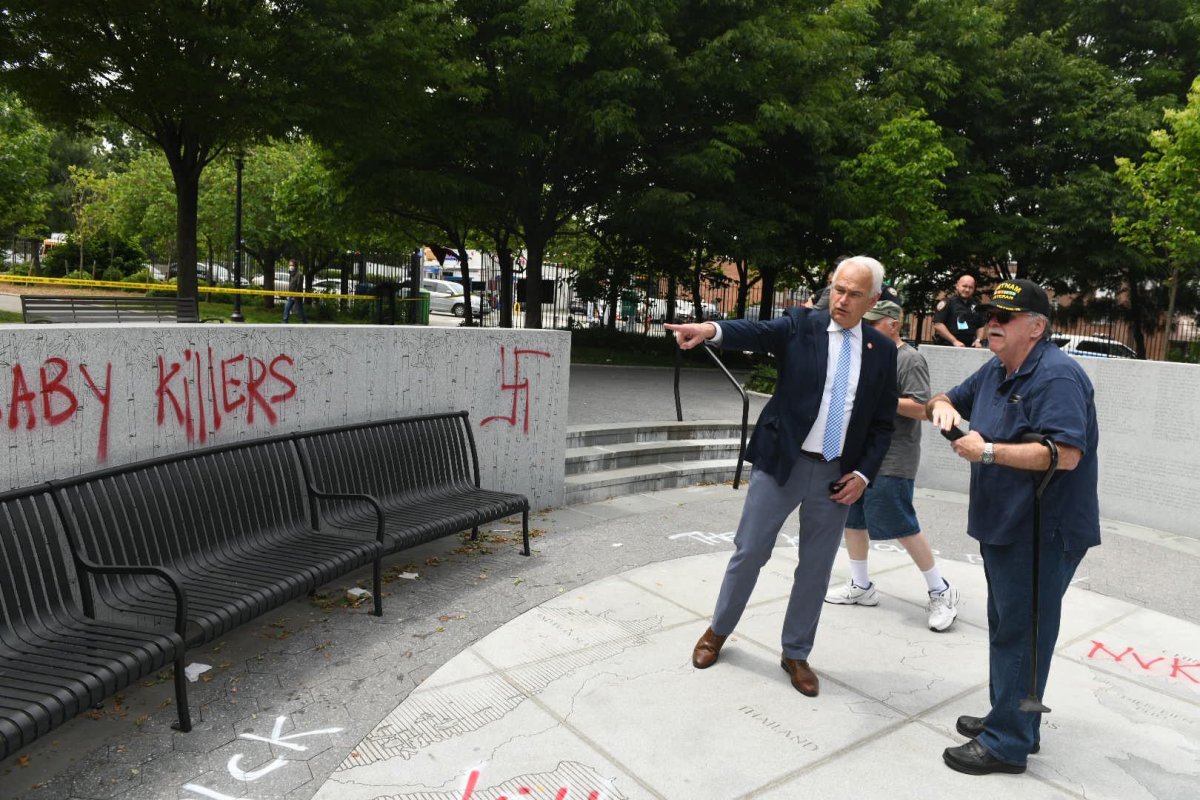 Located in the sprawling, leafy Elmhurst Park, the Queens Vietnam Veterans Memorial was erected in 2019 to honor the fallen soldiers of the Vietnam War. And on the heels of Memorial Day, the Vietnam War monument was vandalized with swastikas, profane graffiti, and the term ?baby killers.?

What We Know About the Memorial’s Desecration

I am deeply disgusted by this cowardly act of vandalism at the Queens Vietnam Veterans Memorial.
I am working @NYPD110Pct to make sure the perpetrator is brought to justice. I offer a $1,000 reward for information leading to the arrest and conviction of the sick soul who did it. pic.twitter.com/tKlcKzNsz8

The vandalism was reported to the New York Police Department via a 911 call around 1 a.m. on Wednesday, reports the New York Post. When NYPD officers arrived on the scene, they discovered a troubling sight: the semi-circular granite memorial was covered in hateful and anti-Semitic graffiti.

Written in red on the granite walls were the phrases “fallen solvs” and “baby killers”, as well as the Nazi symbol. Scrawled in white on the stone floor were the phrases “god sucks d-k” and “baby killers”. Another swastika was written on the floor in red. On a boulder, there was another swastika and the number “110” written in red. New York City Councilman Robert Holden shared the images on social media, vowing to find the vandals of the Vietnam Veterans Memorial.

“I am deeply disgusted by this cowardly act of vandalism at the Queens Vietnam Veterans Memorial,” he tweeted. “I am working? to make sure the perpetrator is brought to justice,” added the democrat. “I offer a $1,000 reward for information leading to the arrest and conviction of the sick soul who did it.”

New York Gov. Andrew Cuomo released a statement Wednesday evening regarding the incident. “Inscribed on the wall of the Queens Vietnam Veterans Memorial are 371 names — 371 proud children of Queens who gave their lives in service of freedom and democracy half a century ago,” Cuomo said. “These names are an eternal monument to the ideals that unite us as New Yorkers and as Americans, values that are worth fighting and dying for. That’s why the Memorial’s desecration with graffiti and hateful symbols, coming just two days after Memorial Day, isn’t just offensive to the memories of these soldiers and to their loved ones — it’s antithetical to the moral fiber of our state and our country, and it’s an insult to all those who stepped up in service of it.”

The investigation into the potential hate crime is ongoing, the NYPD has told Fox News. News of a recent arrest has been made, though police have not yet responded to requests for comment. On an interview with WABC Radio?s ?Rita Cosby Show,? Holden said the suspect is an Elmhurst man that police officers had been monitoring because of familiar elements in his graffiti. According to Holden, the alleged perpetrator also vandalized Hoffmann Park at the corner of Queens and Woodhaven boulevards.

What Is the Queens Vietnam Veterans Memorial?

According to the NYC Parks Department, the Queens Vietnam Veterans Memorial was designed by architects Denise Mattes and Frank Varro. The memorial consists of two semi-circular granite walls inscribed with nearly 400 names of Queens service members who died in the Vietnam war or are classified as missing in action. The memorial sits on the northwest corner of Elmhurst Park, near the intersection of Grand Avenue and 79th Street. It is the first Vietnam Memorial to be opened in Queens, where more than 59,000 vets call home — more than The Bronx, Brooklyn, Manhattan, or Staten Island.