Obama gave his final goodbye as Commander in Chief, and here’s what he had to say 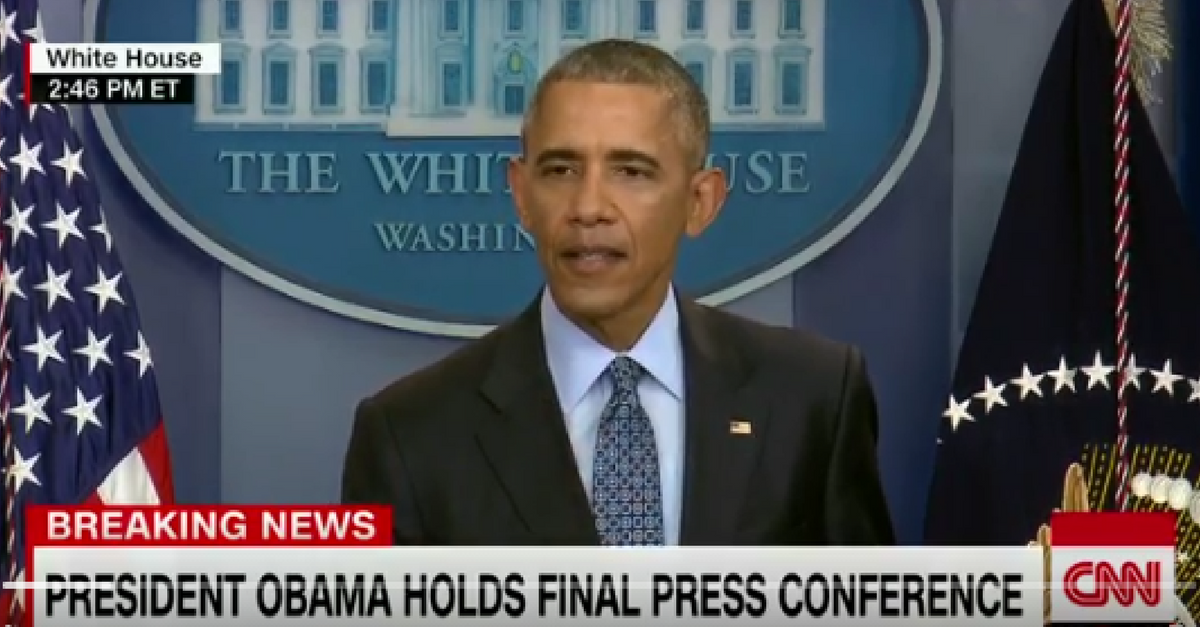 President Obama answered questions from reporters for the last time on Wednesday during his final news conference as president. Just two days before President-elect Donald Trump takes office, Obama thanked the press for their cooperation and for holding him accountable during the last eight years before addressing Russia’s alleged involvement in the 2016 presidential election, the United State’s incoming administration, and his plans for life after the White House.

RELATED: President Obama is finishing his term on a positive note as his approval rating jumps once again

“America needs you, and our democracy needs you,” Obama told the members of the press, adding that a free press is essential to a successful country. “I’m looking forward to being an active consumer of your work instead of the subject of it.”

On the issue of Russian hacking and the subsequent sanctions placed on the country, Obama said that he thinks it’s in America’s best interest and in the world’s best interest to have a constructive relationship with Russia, but that an escalation in anti-American rhetoric took place in Russia after Putin became president.

Obama: "It is in America's interest and the world's interest that we have a constructive relationship with Russia." https://t.co/sh36AzFWGj

The president also addressed the peaceful transfer of power to President-elect Donald Trump, assuring the press that “it is appropriate for [Trump] to go forward with his vision and his values.” He noted that it’s important to see what Trump does once he is sworn in, while also expressing hope that we do not see the ratification of discrimination or the mass deportation of families happen in the future. The president also revealed that he has given Trump some of his best advice, including emphasizing working closely with advisers, staff, and cabinet members and thinking through “big shifts in policy.”

President Obama describes conversations with Trump as "cordial," adding, "I have offered my best advice" https://t.co/dUB4ipwoDD

As for his plans for post-presidency life, Obama wants to spend “precious time” with his daughters Malia and Sasha and wife Michelle, do some writing, and “not hear myself talk so darn much.”

He signed off by reflecting on his daughters, saying that they have grown up to be very patriotic, but that they are not blind to problems within our own nation.

“They’re representative of this generation that makes me really optimistic,” he said. “I believe in this country. I believe in the American people. I believe that people are more good than bad. I believe tragic things happen. I think there’s evil in the world. But I think that at the end of the day, if we work hard and if we’re true to those things in us that feel true and feel right that the world gets a little better each time.”

On Friday, President Obama will welcome the Trump family to the White House, after which the incoming president will be officially inaugurated. The Obamas have planned a trip to Palm Springs, California following the ceremony and will return to Washington, DC to live as ordinary citizens for at least the next two years while Sasha Obama finishes school.

RELATED: A moving truck was spotted outside of the Obamas’ new D.C. home