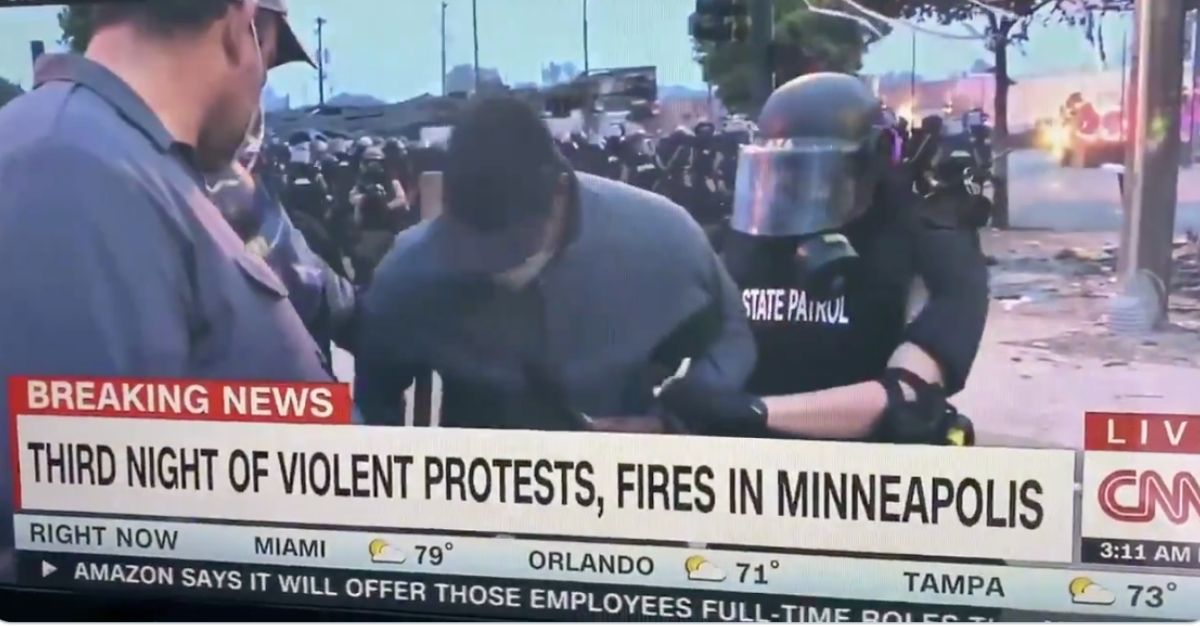 A CNN reporter was arrested while giving a live TV report Friday morning in Minneapolis, only to be released an hour later, as the CNN crew was covering ongoing violent protests over the death of George Floyd.   Around 500 National Guard troops had been called to the area following several violent riots across the city. State Police detained CNN correspondent Omar Jimenez, and his camera crew shortly after 5 a.m. Jimenez was reporting live from the street south of downtown, near the police precinct building which was set on fire.

Jimenez, who is an African American, could be seen holding his CNN badge while reporting, identifying himself as a news reporter, telling officers the CNN employees would move wherever officers needed them to. That’s when an officer decided to grab his arm as he was talking, and put him in handcuffs. The reporter had just shown a Minneapolis protester being arrested by police, and about half a dozen police officers in gas masks quickly surrounded him.

“It didn’t make any sense to me,” law enforcement analyst Charles Ramsey says about the arrest of a CNN team in Minneapolis who had clearly identified themselves as press. “…There’s no way something like that should occur.” https://t.co/caz6vZT4af pic.twitter.com/XCXsqU74iX

Jimenez can be heard saying, “We can move back to where you like. We are live on the air here. Put us back where you want us. We are getting out of your way — wherever you want us (we’ll) get out of your way.” Police told the CNN crew they were being arrested, and one member of the crew relayed to the network. Minnesota Governor Tim Walz apologized to CNN President Jeff Zucker saying he would work to have all the men released immediately.

The reporter, producer Bill Kirkos, and photojournalist Leonel Mendez were taken to the city’s downtown public safety building. After his release, Jimenez reported live outside from downtown saying that he’d been treaded cordially after being led away.

This is unbelievable. Minneapolis police just arrested black CNN reporter Omar Jimenez live on air even after he identified himself. I’ve never seen anything like this.#GeorgeFloyd #MinneapolisRiot #omarjimenez pic.twitter.com/gSx1Kuxznm

The Minneapolis State parole release statement about the incident, reading, “In the course of clearing the streets and restoring order at Lake Street and Snelling Avenue, four people were arrested by State Patrol troopers, including three members of a CNN crew. The three were released once they were confirmed to be members of the media.”

CNN did respond to the incident, disputing the state police character station through Twitter. The network thanks Governor Walz for his actions to aid the release of the crew but noted that the men did no wrong since they indeed had identified themselves on live television as journalists.