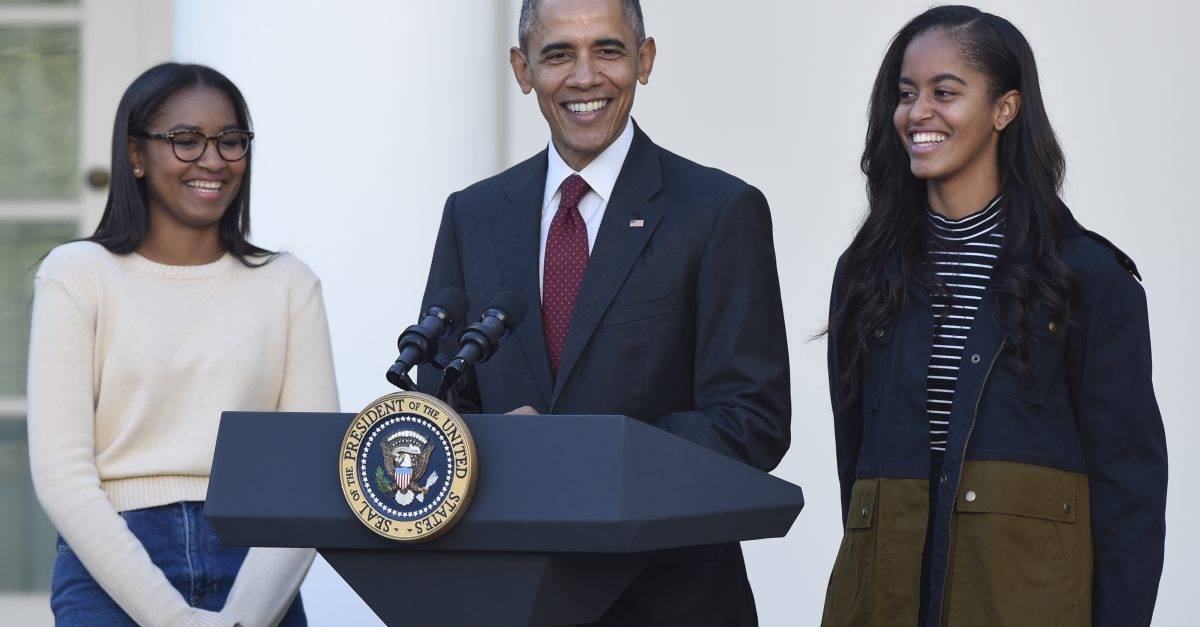 (AP Photo/Susan Walsh)
President Barack Obama, standing with his daughters, Sasha, left, and Malia, right, speaks about pardoning Abe, the National Thanksgiving Turkey, during a ceremony in the Rose Garden of the White House, on Wednesday, Nov. 25, 2015, in Washington. This is the 68th anniversary of the National Thanksgiving Turkey presentation (AP Photo/Susan Walsh)

During an interview with writer Mike Cernovich on his radio show, “The Alex Jones Show,” Friday, the topic of discussion turned to the Obama’s parenting style, which Cernovich heavily criticized.

“He’s completely abandoned his daughter who is making her rounds through the New York party scene. Remember when Jenna Bush went out and drank a little bit of beer? I think actually in Austin, Texas,” Cernovich said.

“It was the end of the world,” Jones responded.

“Obama’s basically an absentee father, abandoned — a lot of sad things going on there,” Cernovich added.

RELATED: Alex Jones retracts one of last year’s most infamous conspiracy theories on the air

That’s when the conversation went from merely criticizing the Obama’s parenting style to reigniting an old conspiracy theory that Sasha and Malia aren’t the former president’s biological children.

“The word is those aren’t even his kids,” Jones said.

“I’ve heard that, too,” Cernovich replied.

Neither of them, however, gave any evidence to back up the claim, which was widely spread through anti-Obama websites and message boards during Obama’s years in the White House.

Jones, who is known for his conspiracy theories, was praised by President Trump during his campaign. Trump also appeared on his show in December 2015 before he was the Republican presidential nominee.