Passenger Brawl Breaks Out on Plane Over Mask Dispute 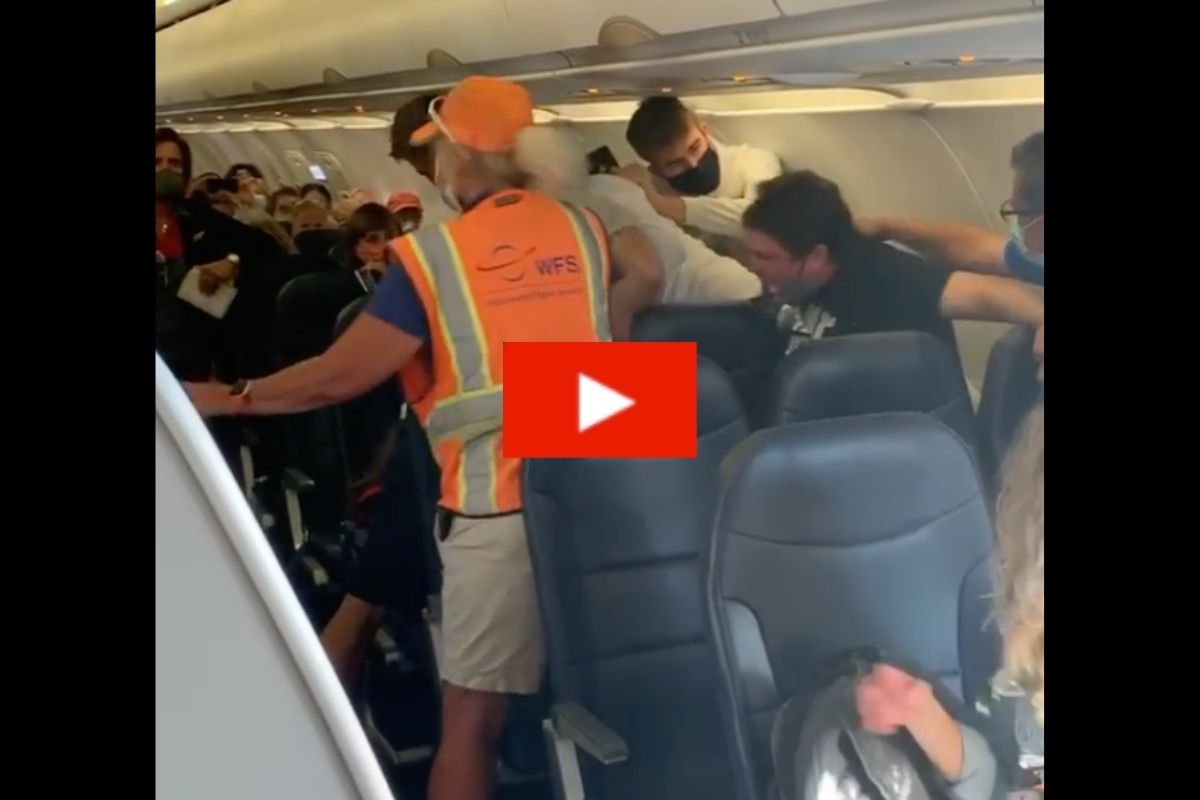 I can’t believe we are still having these kinds of issues, but to look on the bright side, the entertainment is timeless. If you disagree with me, then that’s your right, but I’m still going to express my opinion on this matter: because we are stuck in the middle of the coronavirus pandemic, you should always be wearing a face mask. Especially on an airline flight.

Rylie Lansford recorded an amusing video of a brawl over face coverings and posted the Instagram video on social media. She explained that she was on an Allegiant Airlines flight from Mesa, Arizona, to Provo, Utah, when the altercation took place right before her eyes.

A man sitting behind her was, in fact, wearing a protective face shield, but with nothing underneath it, the area by his chin was wide open. A flight attendant, probably just doing her job at the most, asked that he wear a mask that covered his mouth and nose. Allegiant Airlines mask policy states that “all passengers to wear face coverings, made of solid material, that fully cover the mouth and nose and are secured under the chin,” and the masks should be worn at all times.

Watch the fight break out below:

This happened on my flight earlier today. Allegiant flight from Mesa-Phoenix to Provo, UT. I will be posting the story and what happened next!

The man, thinking he was doing enough to fight COVID-19 with just an open shield in front of his face, started to argue with the flight attendant, and soon another man on the Allegiant flight enters the conversation. The other man tells the man with just the face shield on to just put his face mask on, to which he refuses. The man with the face shield then decides to say he would take it up with the airline, to which Lansford thought the altercation would end there.

However, the second man started to raise his voice, yelling that the man in violation should get off the plane. Lansford explained that he didn’t stop yelling and cursing at the first guy for not following the order and things started to get messy. The flight attendants warned the maskless man that because he refused to comply, security was called to escort him off the plane. And that’s when the fight breaks out.

Lansford continued to explained that the man refusing to wear the mask got up and threw the first punch and the second man. That’s when she decided to get up and record a video of the fight. The video shows that as the fight started to dwindle down with everyone trying to calm the situation, the mask dispute was finally settled with the man without a mask being removed from the plane by police officers.

A spokesperson from Allegiant Airlines told Newsweek, “On Saturday, Oct. 3, a passenger was removed from flight 607 with service from Mesa, Ariz. to Provo, Utah, for refusing to comply with our mask policy. While the passenger was being escorted off the plane, he had an altercation with another passenger. Law enforcement was called to assist. Allegiant requires all customers to wear a face-covering over their nose and mouth at all times when traveling to help protect them and those around them. Face coverings are required throughout travel, including at the ticket counter and in the gate area, as well as during flight.”

I don’t care what airlines you’re flying, whether it be an Allegiant Air or American Airlines flight. The United States is heavily going through issues because of these types of scuffles, so don’t be afraid to speak up during these current times. We don’t want to see more coronavirus diagnoses, and many of you already know how tough COVID-19 recoveries are.