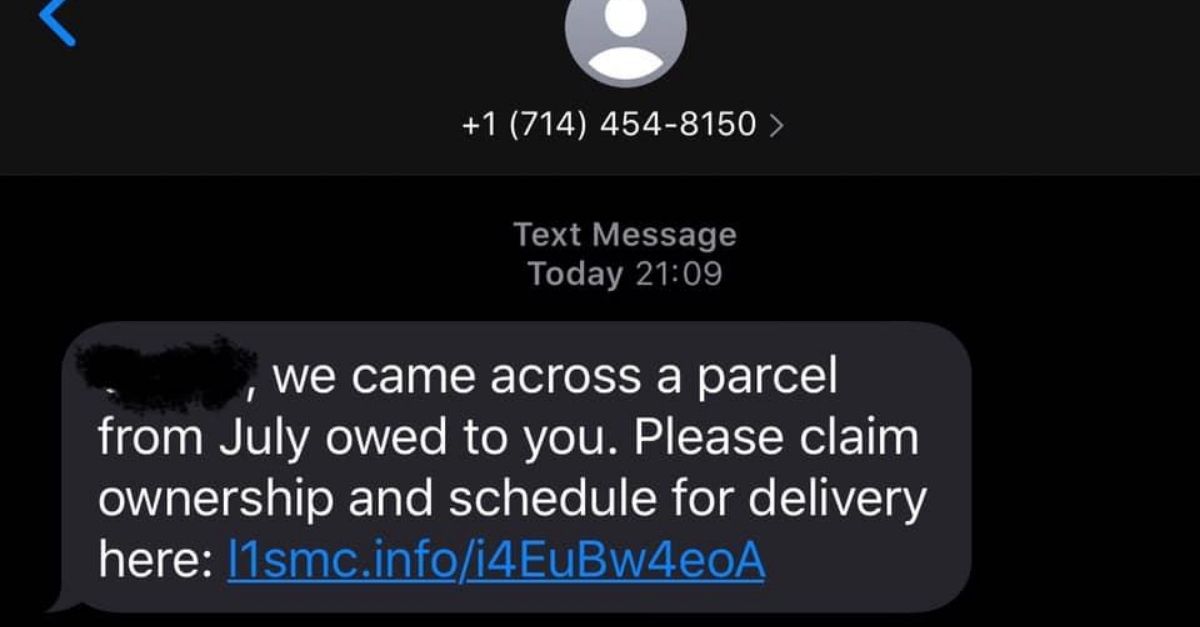 SCAM ALERT! Authorities are warning their communities about a phishing scam that cybercriminals are sending through a text message with different phone numbers, which includes a malicious link to try and obtain the victims’ personal data. According to authorities, the text message may contain language that makes the targeted victim believe that they actually have a package pending or waiting for them, in an attempt to click on the link and share personal information. The cybercriminals are able to steal your identity, install malware software and your phone, and empty your bank account with just one click due to smishing, also known as a form of phishing involving a phone number or text message. According to the Orange County Sheriff’s Department, the best course of action is to ignore the message and not click on suspicious links, and do not provide any personal financial information.

The Sheriff’s Department also suggested blocking the number where the text messages came from. On August 24th, the Washington Police Department published a Facebook post warning the public not to give out any details to scammers. The Sheriff’s Department encourages everyone to look out after each other by sharing the information with those most vulnerable, so the cybercriminals do not succeed.

The text message scam reads, “[Recipient full name], we came across a package from February pending for you. Please assume ownership and confirm delivery here: [link included].” Several on social media have speculated that these text messages are linked to sex trafficking, but several US police departments have denied it, stating that there is no evidence to suggest they are connected. Law enforcement officers in different states have issued warnings about the scam, with photos matching those on social media posts including Richland Police Department, Washington, Albert Lea Police Department in Minnesota, Spanish Fort Police Department in Alabama, Oak Bluffs Police Department in Massachusetts, and Christian County Sheriff’s Office in Kentucky.

Several Facebook users who say they clicked on the dangerous link were redirected to a page saying that they have been selected to win a prize, such as an Apple laptop or an iPhone, or stated they would receive a prize if they filled out a survey. If you agree to claim the prize you are then asked for all your personal information.

Had 2 of these sent to me, I deleted

According to the Richland Police Department in Washington, a spokesperson added that it appears to be more of a financial phishing scam. She noted, “While I cannot say 100% this isn’t somehow associated to sex trafficking once the info is given out, on the surface, it appears to be a phishing scam that is looking to victimize people financially.”

In February, the Federal Trade Commission reported a very similar delivery scam where people also received text messages claiming to be FedEx Tracking notice, but actually took them to a fake Amazon prime page, and then invited them to complete a customer satisfaction survey. It’s completed, the page then told them they had won a prize and asked him to input their credit card number to cover the handling and shipping.