Police are looking into several cases of people who are reportedly buying baby formula and replacing it with flour, only to be returned for cash. According to the NBC Charlotte Defenders team uncovered, out of those few cases, the formulas that were tampered were put back on store shelves. Some parents complained, saying they didn’t realize the product had been tampered with until their children got sick.

According to Madeline Roque, her 9-month-old daughter Adeline is finally smiling again after a frightening few days. Adeline was crying, refusing her bottle, vomiting, and passing a lot of gas. Desperately trying to find out what was causing her to get so sick, the new mom noticed the baby formula she purchased from Wal-Mart looked off.

The mother stated the milk was a different color than it usually was, and the texture was clumpy. She let the mixture stand for a while hoping it would dissolve, but noticed it separated, which is something baby formula never does. When she poured the bottle into the sink, she saw how it clumped together and was scared that her daughter’s stomach was the same as the texture in the sink, or worse. She quickly realized the mixture was baking flour.

She notified Wal-Mart, who stated that their store policy is to not put any returned products back on the shelves, but they are investigating the incident. Which kind of makes you wonder how true the statement is. Since you know, the baby actually got sick. Plus, with all the tampered products that have been making headlines these past months, baby formula could be an easy target for dumb people who have no morals. It’s truly a new low for those who are looking for a few extra bucks. It’s dumb and shameful, you’re seriously putting an innocent child at risk here.

Unfortunately, this isn’t the first time an incident with fake formula has been reported. Last month, an Arizona woman was arrested after running a baby formula theft ring, making nearly half a million dollars in profit. In 2017, a woman pleaded guilty to tampering with baby formula, who replaced it with a flour and sugar mixture before returning it for cash. Last year, another mother reported falling victim to tampered formula after realizing the product was clumpy at the bottom. When she tasted it, she realized it was also baking flour.

All these incidents have prompted stores like Walmart and CVS to launch investigations into claims made about tampered formulas over the past few years. To make sure the formula isn’t tampered with, authorities are asking parents to check everything is properly sealed before use. The formula will always mix with water, so if it separates, it might be a sign that it contains something else rather than the formula itself. 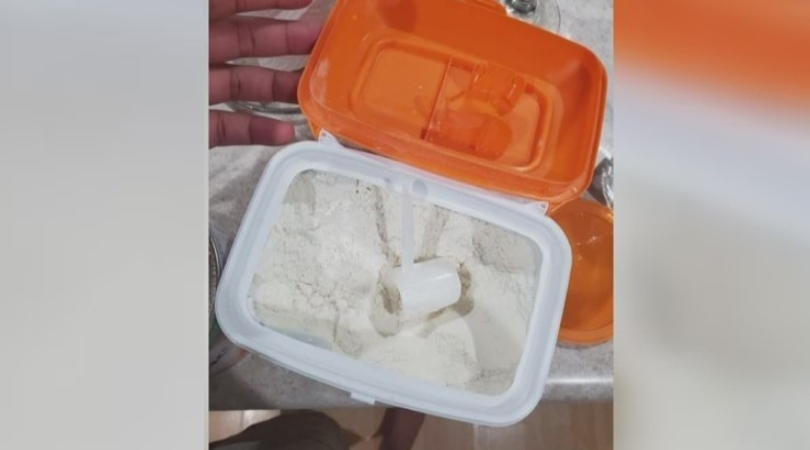