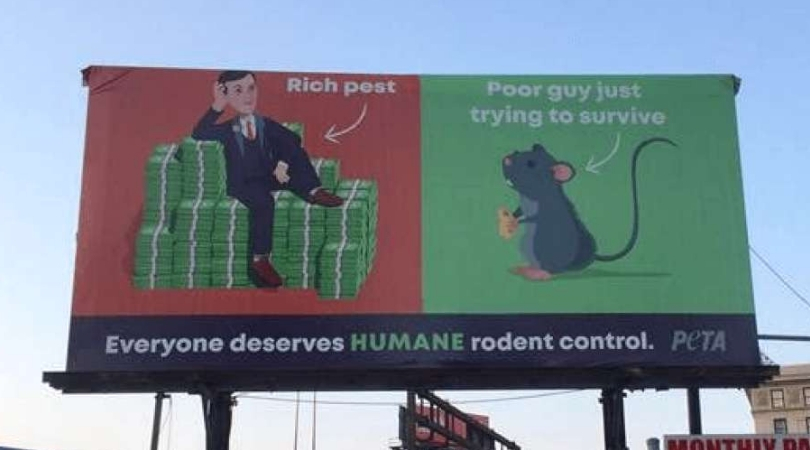 It looks like PETA is out trolling again. A billboard sponsored by the group People for the Ethical Treatment of Animals has decided to troll Jared Kishner by drawing a comparison between the President’s son in law and a rat. PETA is most likely playing off of recent comments made by President Donald Trump calling the Maryland city a “rat and rodent-infested mess.”

The new billboard went up near City Hall, the city’s central police district office and other municipal buildings. It shows a cartoon of Trump’s son-in-law, who is an owner of rodent-infested apartment buildings in the Baltimore area. On the billboard, Jared Kushner is called a “rich pest” as he sits on top of a pile of money.

Across from him is a cartoon rat holding a piece of cheese, with the words “poor guy just trying to survive.” In late July, President Trump sent tweets disparaging Baltimore, calling it a “disgusting place” where no human would want to live. So yeah, PETA wanted revenge and knew exactly who to attack.

Defending the rats is strange but at least someone in Baltimore has nailed the big slumlord.Baltimore billboard put up by PETA calls Jared Kushner a 'rich pest' https://t.co/wjLzHwlWiH

Kushner owns more than a dozen apartment buildings that were cited for more than 200 code violations in 2017. There were reports of mold, maggots, and mice infestation. A private investigator who looked into all of Kushner’s properties called the managers “slumlords.” Through a statement, PETA president Ingrid Newkirk,” stated the billboards show that “smart, social, resourceful rats who are just trying to eke out an existence suffer when entitled landlords to neglect humane rodent-control measures.”

The group argued that in a way, rats were like humans, stating, “rat mothers are excellent, protective caregivers who sing to their babies and that rats giggle when tickled and can feel as much pain as any other mammal, including humans.” They also have tips for humane rodent control which included abandoning poison and using “ingestible birth control” to deal with rats and having landlords use well-sealed containers that can’t chew through any food waste and garbage.

Obviously, this isn’t the first time PETA has used billboards to convey a message. Last summer it got heavy criticism when it supported putting up one’s urine Marylanders to not eat crabs given that Maryland is very well known for its crabs cooked with Old Bay seasoning. One of the billboards read, “I’m ME, Not MEAT,” alongside a picture of a crab, urging everyone to go Vegan.

So, is PETA going overboard with all their Billboards around the country? Yeah sure, I can see why people complain. I will say that this time, I’m with them on this one. Maybe not the whole rat part, because let’s face it, rat’s are gross. But the whole Kushner thing, yeah, I get you PETA.