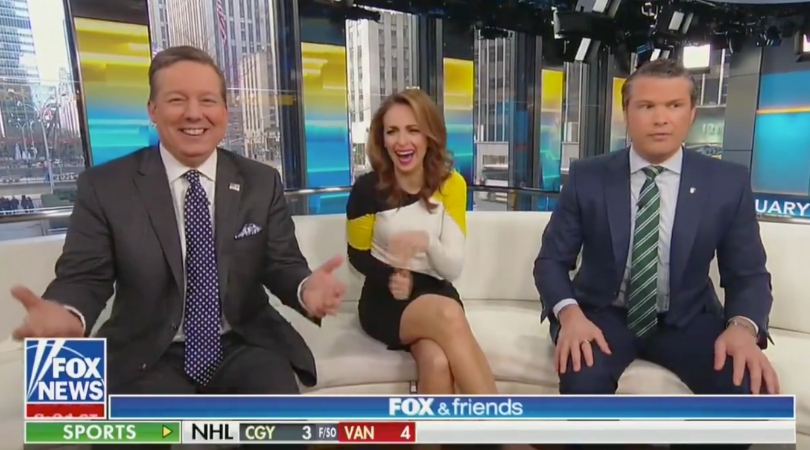 Someone call the police and arrest this man asap and charge him with all the possible charges on earth! ?Fox and Friends? weekend personality Pete Hegseth shared some news about his, erm…let’s call personal hygiene habits, that left several people, including me, beyond grossed out.

Hegseth was on the air with Jedediah Bila and Ed Henry when after a commercial they started talking about Hegseth eating day-old pizza during the break. But no, surprisingly enough, that wasn’t gross enough for them. They then began talking about New Year’s resolutions, in which Hegseth said, ?As I told you my 2019 resolution is to say things on air that I say off air … I don?t think I?ve washed my hands for 10 years.?

Fox News’ @PeteHegseth admits, unprompted, that he hasn’t washed his hands in 10 years.

“Germs are not a real thing,” Pete says. “I can’t see them, therefore they’re not real.” pic.twitter.com/9hsAb9YA9j

Henry and Bila laughed their way through the abominable comment, because what else do you do. Why doesn’t he wash his hands?  According to Hegseth, he doesn’t believe in germs since he can?t see them, which meant they aren’t real. Safe to say viewers and social media users were just as grossed out as expected because, duh. Hegseth took his statement three times further and created the #Don’tWash hashtag on Twitter after a user defended himself.

Now, I?m no health expert, but I mean, WASHING YOUR HANDS IS CRUCIAL. It?s not only an incredibly important way to keep yourself healthy but other people around you too! Can you imagine shaking hands with someone who just went to the restroom and they didn’t wash their hands? That’s disgusting and just rude and inconsiderate. Clean hands are healthy hands, my man.

In fact, CDC state that ?clean hands save lives?. Regularly washing your hands before and after you do things, such as using the bathroom, blowing nose and handling food, is one of the best ways to remove germs, prevent the spread of germs to other people and you can avoid getting sick.

Honestly, I can?t believe I have to say this, let alone remind you why you SHOULD wash your hands, but here it goes. To refresh your mind, the CDC recommends washing your hands:

This article was originally published on Februarly 11, 2019. We brought it back to remind you that you should ALWAYS wash your hands. ALWAYS, especially now.