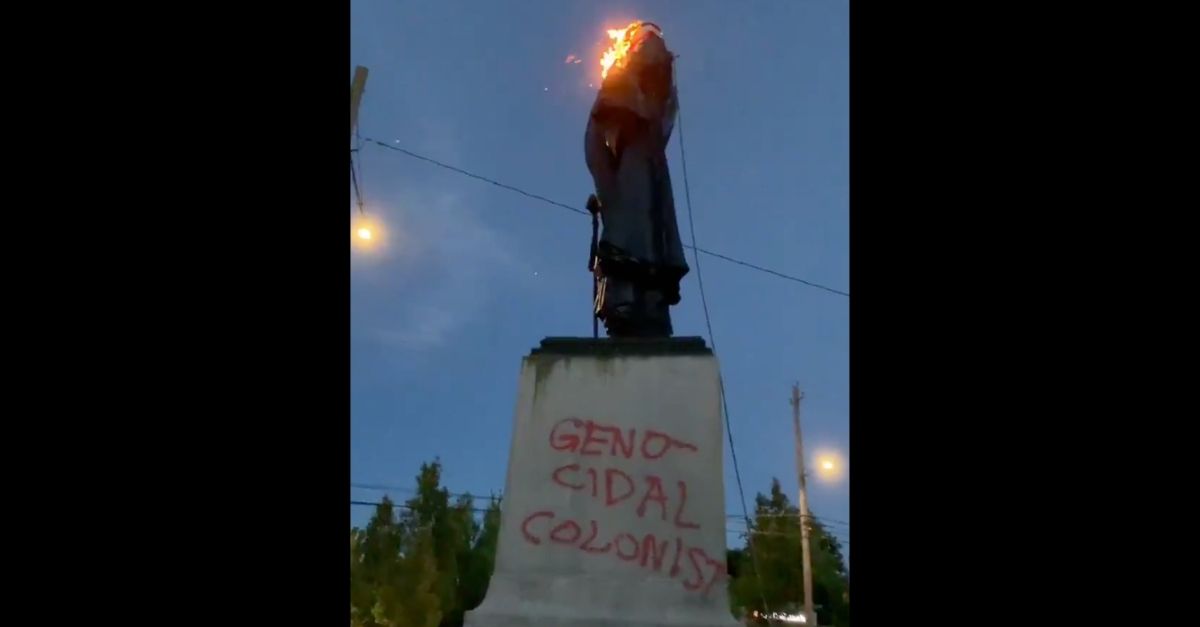 Rioters decided to burn down an American flag on top of the statue of George Washington in Portland before tearing it down. The statue was pulled down by a group of protesters, who reportedly converged on NE Sandy Boulevards and NE 57th Avenue.

According to KOIN News, some protesters wrapped the statue’s head with an American flag and then lit the flag on fire. That’s when the number of protestors grew over the next hour until there were enough people to pull the statue to the ground. Thursday marked day 21 of demonstrations for police reform and racial justice in Portland, Oregon.

Antifa rioters on Sandy Blvd. in Portland draped a US flag over a George Washington statue & set it on fire. They then toppled the statue. “Genocidal colonist” & “f— cops” are sprayed on monument. Rioters have began to build another autonomous zone nearby. pic.twitter.com/TrZkhPK9zp

A news crew from the outlet allegedly found the statue face down covered in graffiti. Shortly after the George Washington statue was toppled, Portland Police arrived on the scene. After further inspection of the statue, the date 1619 was sprayed on it, a reference to the arrival of slaves to the American colonies. The words “genocidal colonist” was also spray-painted on the bronze statue. The statue of Washington dates back to 1926.

Journalist Andy Ngo shared videos on Twitter of the destruction of property, writing, “Antifa rioters on Sandy Blvd. in Portland draped a US flag over a George Washington statue [and] set it on fire. They then toppled the statue. ‘Genocidal colonists’ [and] ‘f— cops’ are sprayed on monuments. Rioters have begun to build another autonomous zone nearby.”

The 10-foot bronze statue was pulled by protesters from its Granite Base by several dozen people which was led by a Minnesota-based Native American activist right outside the state capitol. According to the Minneapolis Government website, the 10ft tall bronze sculpture of Christopher Columbus was dedicated on October 12, 1931. A statue of Thomas Jefferson, which stood outside the Jefferson High School, was also torn down by several demonstrations. The statue’s base was spray-painted with the phrase “slave owner.”