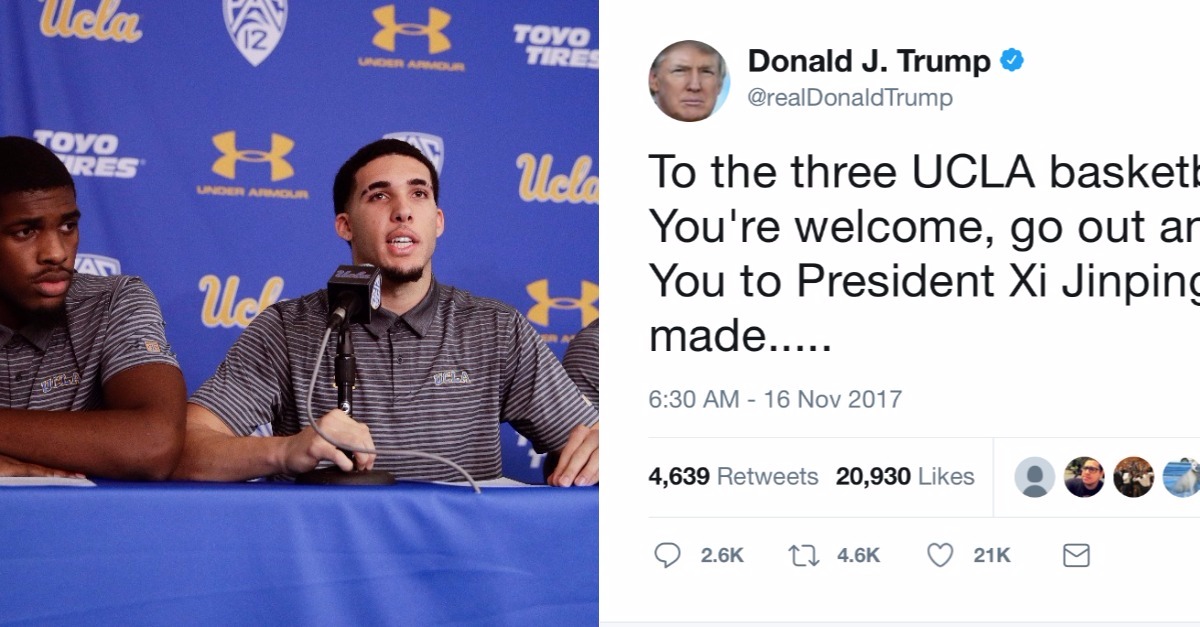 After President Trump stepped in to help save UCLA’s basketball players from a potential 10 years in jail, he tweeted them a few words of wisdom.

RELATED: President Trump gets praise from an unlikely source after intervening on behalf of UCLA players

“To the three UCLA basketball players I say: You’re welcome, go out and give a big Thank You to President Xi Jinping of China who made your release possible and, HAVE A GREAT LIFE! Be careful, there are many pitfalls on the long and winding road of life!” Trump said.

To the three UCLA basketball players I say: You're welcome, go out and give a big Thank You to President Xi Jinping of China who made…..

….your release possible and, HAVE A GREAT LIFE! Be careful, there are many pitfalls on the long and winding road of life!

Trump intervened on behalf of the players — LiAngelo Ball, Jalen Hill and Cody Riley — when they were arrested for shoplifting while in the China to play their season opener against Georgia Tech. According to ESPN, the three players allegedly stole sunglasses from a Louis Vuitton store in Hangzhou located nearby their team hotel. The team’s athletic director, Dan Guerrero, clarified that the players stole from three stores in total before their arrest. The freshmen were released after a $2200 bond was posted, which was refunded after the charges were dropped.

In a Wednesday press conference, the players read written statements apologizing for their actions. They also thanked the president for his intervention and the Chinese government for dropping the case against them

LiAngelo Ball — brother of NBA player Lonzo Ball and son of LaVar Ball — said, in part. “This does not define who I am.” He continued, “My family raised me better than that.”

Riley said: “To President Trump and the United States government: Thank you for taking the time to intervene on our behalf. We really appreciate you helping us out.”

Before the press conference, President Trump publicly wondered if the players would thank him for his actions in helping secure their release, and he was pleased that they followed through. President Trump worked with President Xi toward the end of Trump’s Asian tour to help the players avoid prosecution.

Ball, Hill and Riley have been suspended from the team indefinitely since returning from Shanghai on Tuesday, according to ESPN.

?These are good young men who have exercised an inexcusable lapse of judgment,? said UCLA basketball head coach Steve Alford during the press conference. ?They will have to earn their way back.?