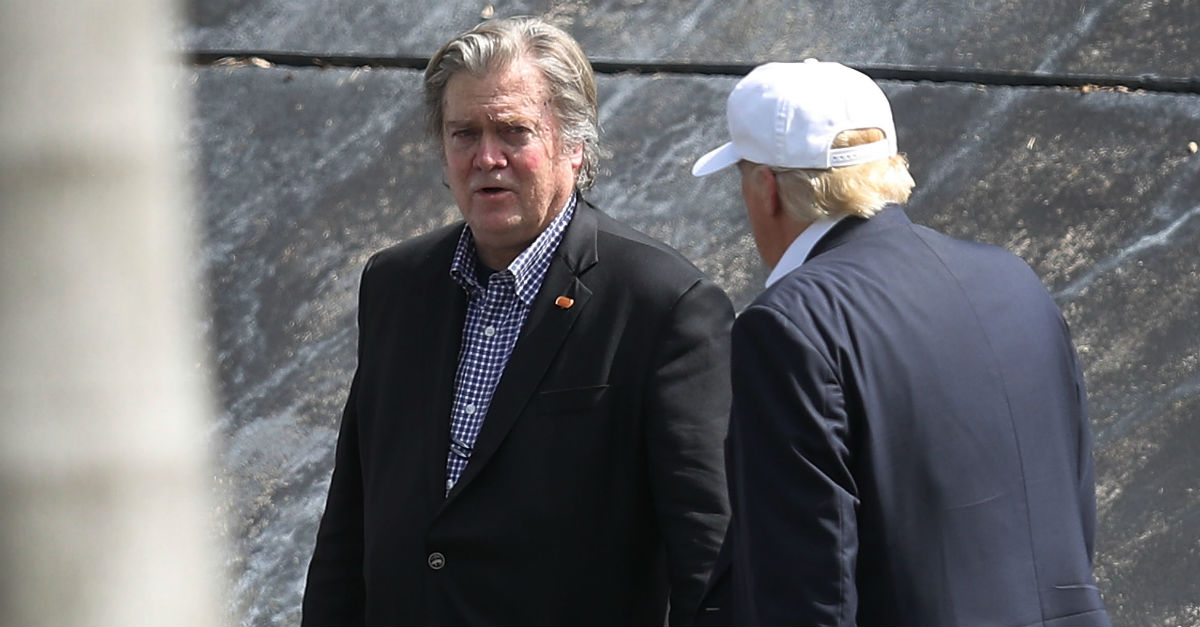 (Photo by Joe Raedle/Getty Images)
MIAMI, FL - NOVEMBER 02: Steve Bannon, the CEO of Donald Trump's presidential campaign, waits as Republican presidential candidate Donald Trump walks toward him after he spoke during a campaign rally at the Bayfront Park Amphitheater on November 2, 2016 in Miami, Florida. Trump continues to campaign against his Democratic challenger Hillary Clinton as election day nears. (Photo by Joe Raedle/Getty Images)

After Wednesday morning’s news that Steve Bannon had some serious complaints regarding Donald Trump Jr.’s June 2016 meeting with a Russian lawyer, the president defended his eldest son in a scorched earth statement.

RARE POV: The Founders would never have trusted the president with sole power to wage nuclear war

In a moment fresh out of a “Godfather” film, here is Trump’s response in full.

Steve Bannon has nothing to do with me or my Presidency. When he was fired, he not only lost his job, he lost his mind. Steve was a staffer who worked for me after I had already won the nomination by defeating seventeen candidates, often described as the most talented field ever assembled in the Republican party.

Now that he is on his own, Steve is learning that winning isn’t as easy as I make it look. Steve had very little to do with our historic victory, which was delivered by the forgotten men and women of this country. Yet Steve had everything to do with the loss of a Senate seat in Alabama held for more than thirty years by Republicans. Steve doesn’t represent my base — he’s only in it for himself.

Steve pretends to be at war with the media, which he calls the opposition party, yet he spent his time at the White House leaking false information to the media to make himself seem far more important than he was. It is the only thing he does well. Steve was rarely in a one-on-one meeting with me and only pretends to have had influence to fool a few people with no access and no clue, whom he helped write phony books.

We have many great Republican members of Congress and candidates who are very supportive of the Make America Great Again agenda. Like me, they love the United States of America and are helping to finally take our country back and build it up, rather than simply seeking to burn it all down.

Bloomberg’s White House reporter, Jennifer Epstein, was one of the first to post the statement on Twitter, making it clear that the release was official by saying that it was sent from White House Press Secretary Sarah Sanders.

Bannon was in the White House for a few months before Chief of Staff John Kelly joined the West Wing, an addition that many political analysts suspect led to Bannon’s departure. Nevertheless, Trump reportedly kept in contact with Bannon and even sought advice when Kelly wasn’t looming, according to the Washington Post.