Friday at CNN started off strong with another bombshell report that seemed to tie members of the Trump campaign — even the president himself — to Wikileaks, but it quickly turned sour when questions arose about the timeline of CNN’s report. Eventually, they were forced to walk back their reporting, even announcing that the piece “was incorrect.”

In the original story (which is still online, though it’s now littered with edits), CNN reported that Donald Trump and his eldest son received an email (presumably from a Wikileaks contact) on September 4, 2016 and that the email offered a key allowing access for hacked documents. The network claims that the story they ran was based on two sources who saw the email — they write that the document was provided to “congressional investigators,” so there’s a pretty good chance that their sources were a pair of congressional staffers. Just after CNN published their story, The Washington Post ran another story with the correct date — September 14, 2016 — and the network was forced to apologize for their earlier reporting.

CNN's initial reporting of the date on an email sent to members of the Trump campaign about Wikileaks documents, which was confirmed by two sources to CNN, was incorrect. We have updated our story to include the correct date, and present the proper context for the timing of email

Though there’s only a ten-day difference between CNN’s original date and the corrected date stamped on their new piece, the timeline is crucial. As The Washington Post noted in their report, the hacked emails offered to the Trump campaign were already public on Sept. 14; they were published only a day earlier. The emails’ sender, who claims his name is Michael J. Erickson, wrote that “Wikileaks has uploaded another (huge 678 mb) archive of files from the DNC.” An attorney for Donald Trump Jr. told the Post that the campaign received “a ton of unsolicited emails like this on a variety of topics.”

I know you can’t help but spread #fakenews @cnn, but now that you know the truth you should have the decency to retract the false story, make the correction, take down the bs tweet, and apologize to the 2 or 3 people that still believe you to be credible #yourewelcome https://t.co/bjL6mSdaii

What are the odds that @cnn has the decency to make a full retraction??? You know, a real one, not hidden on their website or with a 3am tweet. I’m guessing slim to none. #fakenews #notholdingmybreath https://t.co/asrWNaDlkc

The timeline in this story is especially important, because Donald Trump Jr. and Wikileaks are both huge parts of the investigation into Russia’s hacking of the election. Most U.S. intelligence officials say that Wikileaks is a nefarious organization — Trump’s own CIA Director, Mike Pompeo, described them as a “non-state hostile intelligence service.”

Donald Trump Jr. is also beginning to find himself in the searchlight of investigators looking into Russia’s role in the election. On Wednesday, he spent seven hours before the House Intelligence committee talking about his meetings with a Russian lawyer and explaining his conversations with Wikileaks. According the Post, he denied reports that he spoke to his father about a statement to the New York Times before the paper broke a story about the Russian lawyer. Trump’s eldest son claimed that, instead, he spoke to communications director Hope Hicks. When pressed for information on the conversation that he had with his father immediately following the meeting with the lawyer, Trump Jr. claimed he had “attorney-client privilege,” which baffled the committee’s co-chair Adam Schiff (D-Calif.).

The 39-year-old first son hasn’t yet found himself before Special Counsel Robert Mueller’s teams of investigators, but there’s a pretty good chance that he will soon. Mueller’s team is usually a lot more tight-lipped than the congressional lot, so even if Trump Jr. does have the misfortune of meeting them, we probably won’t know anything about it until the special counsel decides to make his report public. 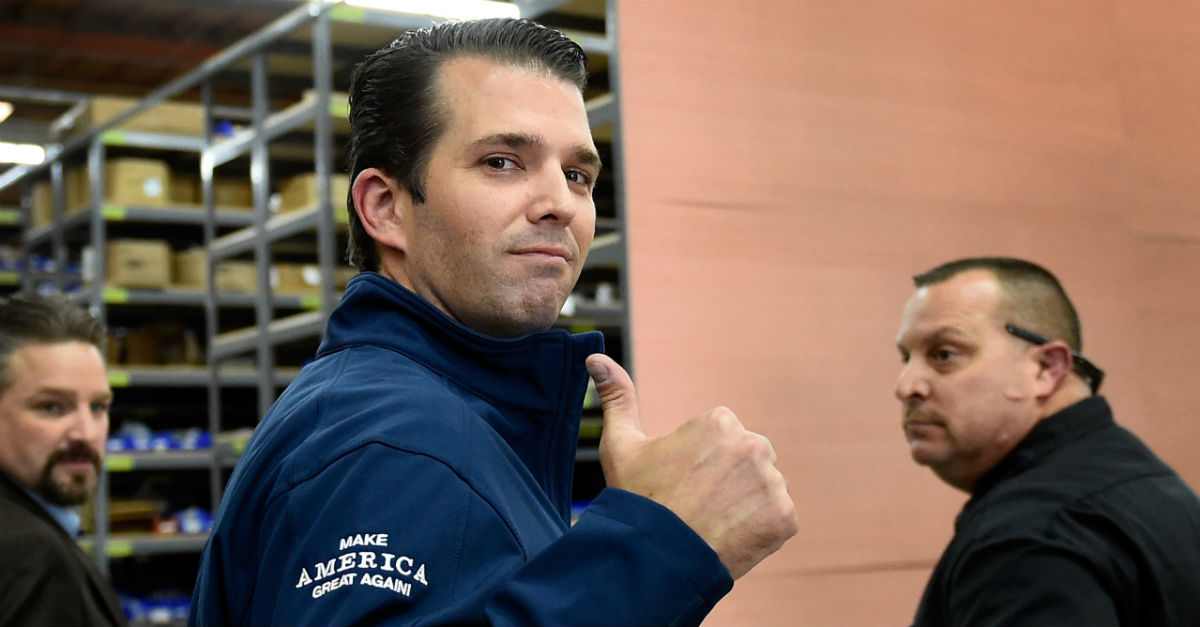