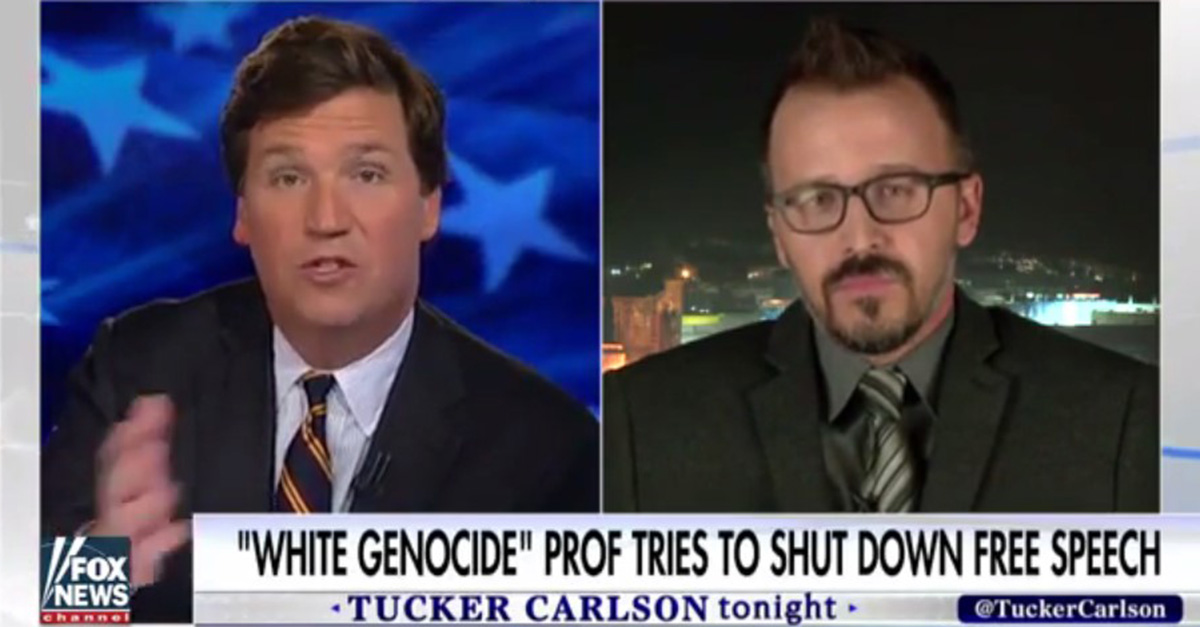 If ever there was a made-for-Fox News topic, this was it. And Tucker Carlson didn’t disappoint in igniting a fiery debate with a professor who was disgusted after a passenger on his flight gave up his first-class seat to a U.S. soldier.

George Ciccariello-Maher, an associate professor of politics and global studies at Drexel University, tweeted his thoughts on the impromptu seat exchange, saying: “Some guy gave up his first class seat for a uniformed soldier. People are thanking him. I’m trying not to vomit or yell about Mosul.”

Carlson suggested to the professor that his beef isn’t really with individual soldiers, but rather with U.S. foreign policymakers, so why take out frustration on the soldier?

RELATED: Tucker Carlson can’t keep from laughing at supporter for the arts

“I think it’s really irresponsible to blindly support, for example, wars that send off young people into combat, risk their lives, kill many others as we’ve just seen in Mosul, 200 people incinerated by U.S. bombs and to not do that in a way that expands anyone’s freedoms, that makes anyone less secure…”

Carlson then asked, so why’d it “make you feel like throwing up?”

“I think U.S. troops need real support, they don’t need symbolic gestures,” the professor said. “What they need is not a first-class seat, they need health care support, psychological support, women in uniform need to not be subjected to epidemic of sexual assault, and more than anything, they don’t need to be deployed, have their lives risked, be taken away from their families for wars that do nothing and no good for anyone.”

RELATED: Tucker Carlson sparred with an anti-Trump guest and promptly eviscerated her

All were fair points, even Carlson agreed, but the perplexed host still pressed him on the issue of what’s so wrong about the passenger giving up his first-class seat and the amenities that come with it to a soldier: “OK, that’s fine, but why is it bad to give him a first-class seat, I’m missing that? Someone’s trying to be nice to the guy who’s going through all these hardships you just described, and that makes you mad. Why?”

Ciccariello-Maher answered: “I’m all for generous gestures devoted toward those who most deserve them in our society and I have the deepest respect for anyone who, particularly for economic reasons, makes difficult decisions, whether it’s joining the military, whether it’s doing other dangerous work that has to take place in our society, whether it’s being an economic immigrant migrant, and I think these people all deserve better, they deserve to not have to join the military if they would rather just get an education…”

Carlson jumped in again, and this conversation could have gone round and round all night long it seemed.