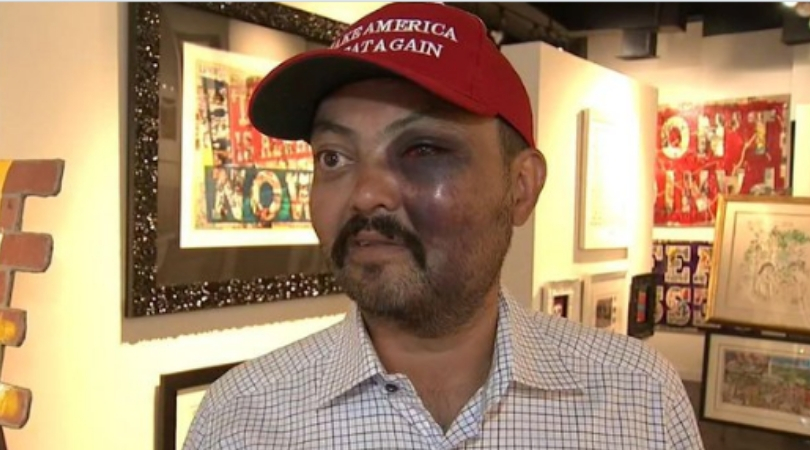 A New York City art gallery owner says a group of teenagers physically attacked him because he was wearing a red ?Make America Great Again? hat. According to authorities, 42-year-old Jahangir Turan was on Canal Street in SoHo around 6:30 p.m. when he was stuck in the head from behind. To avoid any confrontation, the art gallery owner refused any medical attention.

Turan said he was walking through China Town wearing the MAGA hat when a group of teenager yelled ?F*** Trump.” They then proceeded to get closer to him and began yelling at him. He believes around 15 to 18 people were involved in the incident. Turan stated a girl managed to flip his hat and within five to eight seconds into the attack, a man violently pushed him from behind and slammed his head against a scaffolding pole.

Jahangir Turan, 42, of N.J. was viciously beaten by a group of young men in Chinatown for wearing a Trump campaign 'MAGA' cap.

He suffered a gruesome left eye injury when he was jumped by the group on Canal St. near Mercer St. on Tuesday.https://t.co/6lFa4EBBH2

The man immediately got startled and walked away with a fracture in his cheek and a badly swollen eye. He is awaiting an eye specialist to determine if there is any permanent damage to his eyesight. He had recently bought the hat at Trump Tower and plans to leave it at home because he believes it is ?dangerous to wear? a MAGA hat in New York City. But, the attack has not stopped him from expressing his political view and his support for President Donald Trump.

An investigation is ongoing by NYPD, but no official arrests have been made at this time. Two law enforcement sources stated they were skeptical about the situation believing the alleged Trump-hating gang attack, saying he might just have been a brawl between him and another person.

Based on this story, where is the direct correlation between him wearing the hat & the beating? Did the attackers specifically mention the MAGA hat before, during or after the beating? If the hat was the offending issue, why is it in perfect condition?

Safe to say this isn’t the first time a Trump supporter has been harassed for wearing a MAGA hat out in public. A few months ago a California restaurant owner banned anyone who had on a ‘Make America Great Again’ from entering his restaurant. Owner, J. Kenji Lopez-Alt Lopez-Alt compared the hat to a swastika and a white hood, saying it was a symbol of intolerance and hate. The restaurant owner later apologized after heavy criticism, saying all customers will be served, but still, bold move on his part.

I’ve said it once an I’ll say it again. I am going to stand behind the lines on cases like these, but those hats just need to go. They are causing way too many unnecessary problems that can be avoided.