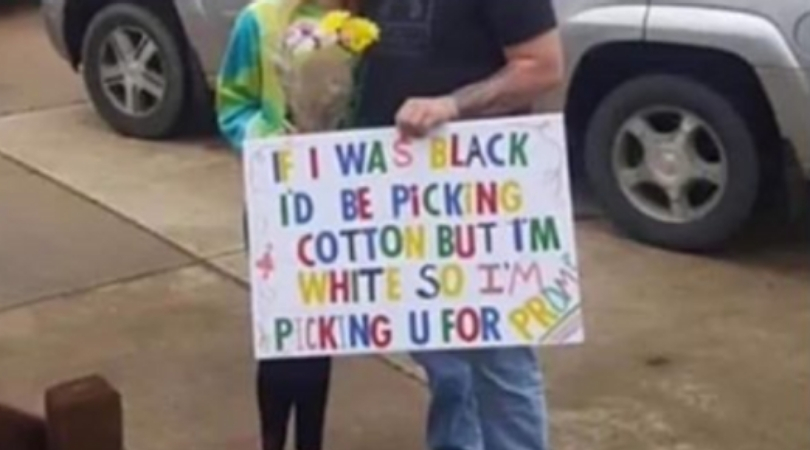 A prom proposal by a Clear Fork student in Ohio has prompted heavy backlash, after a photo of him holding a poster with a racist statement was circulating online. In the photo, the student is standing beside a girl holding a poster reading, “If I was black I’d be picking cotton, but I’m white so I’m picking U for prom.

The student, who has yet to be identified, has been “spoken to” by the school district. According to a statement from Clear Fork Valley Local Schools Superintendent Janice Wyckoff, the board does believe the speech displayed on the poster is highly inappropriate. Regardless of the occasion, the student, who lives in the district but goes to another school, will not be attending Clear Fork High School prom.

So this what we do now y’all make this foo go viral pic.twitter.com/ROgqHwPH1Y

The original post from the student has been removed, and the teen is said to be remorseful of his actions. But school officials have not made it unclear if he is facing disciplinary actions. Wyckoff said the 1,700 students in the district are disappointed about the situation, but the study body as a whole should not be defined by the actions of one student.

“I want to make it clear that our school district is disappointed in this situation. Our student body should not be defined by a single act of a student, who did not think his actions through. This is a teachable moment for this student in particular and for all students. The student understands there are consequences for words. I want everyone to remember this is a child and adolescent who made a bad decision and is learning a lesson the hard way.”

Shockingly enough, this isn’t the first time a high school student uses a similar sign like this to propose for prom. Last year, a Florida high school student also sparked outrage for using the same proposal method. Noah Crowley, who was a senior at Riverview High School was not allowed to attend any future school activities or functions including Prom or graduation.

Noah Crowley, a senior at Riverview High School, posted a photo of himself holding a sign with the words, “If I were black I’d be picking cotton, but I’m white so I’m picking you 4 prom?” via @NBCBLK https://t.co/9ijJyPXWol

The decision was made after several conversations as a “family and additional discussion with Riverview High School and administrators”. Crowley, who was 18 at the time, posted an apology on social media for his actions, saying the post “was a complete joke and it went too far.”

Teens scare me more and more every day. Can we just go back to regular high school Prom proposal signs? Or you know, just pass a note with some boxes to check yes or no?