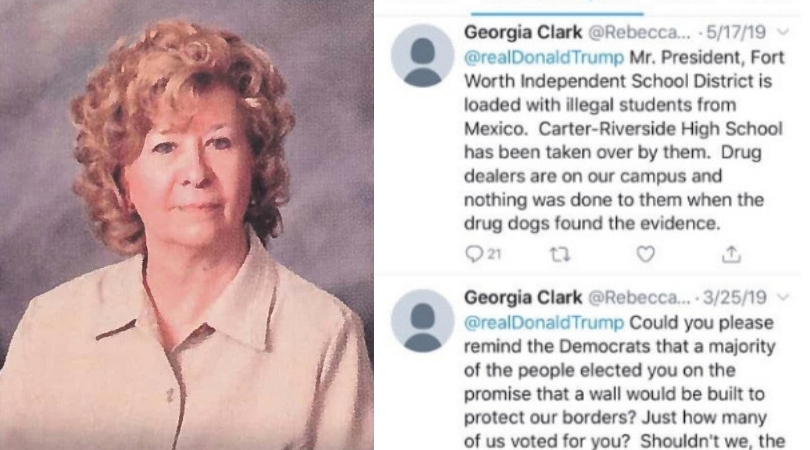 The 250th District Court of Travis County issued a final judgment in the case of a former Fort Worth ISD teacher, upholding the Board of Education’s decision to fire Georgia Clark. Trustees voted back in September 2019 to terminate the employment of the Carter Riverside High School teacher who had then used social media to ask Donald Trump to remove and deport illegal students from her school.

In a unanimous vote, the school board had supported the recommendation of Superintendent Kent P. Scribner, who stated in his professional opinion the totality of Mrs. Clark’s behavior indeed warranted her termination. Clark had immediately appealed her termination.

I’m 2019, Georgia Clark tweeted Donald Trump asking him for help removing “illegal students” from the Fort Worth school she taught at. An appeals court has upheld the board’s right to fire her. https://t.co/3iGCXF5LqA

On November 2019, Texas Education Agency Commissioner Mike Moarth had ruled that she was entitled to get her job back, along with employment benefits and back pay from the time that her contract was not renewed. The next day the school board announced it would appeal the decision. Fast forward to a few months, on Tuesday, the 250th District Court Travis County upheld the board’s decision to fire Clark.

Through a statement, the school district noted, ?The District is pleased that Judge Catherine A. Mauzy recognized the importance of the Board?s ability to make employment decisions in the best interests of its students and school community.? The decision can be appealed with the 3rd Court of Appeals in Austin, TX, but notice will need to be filed within a 30-day span.

Georgia Clark: “I Need My Job Back”

Editors Note: This article was originally published on July 19, 2019. It was updated after the Texas appeals court upheld the Fort Worth school board’s decision to fire Georgia Clark. Below is information that was published before the new updated information was included.

They say you get what you deserve. If you do something stupid or dumb, or just plain ridiculous, it will eventually come back to haunt you. Like in the case of Georgia Clark, a high school English teacher in Fort Worth who was fired and got everything she deserved. Why was she fired? Well one, for being racist. But more specifically, she decided to use the power of Twitter to ask President Donald Trump to get rid of the “undocumented immigrants” in her school.

Mind you, her Twitter account was very public, even though she thought they were private messages to the President. Which I mean, I have nothing against freedom of speech, you say what you want to say. But if you are going to do something as stupid as this, at least make sure your freaking privacy setting are correct!

Georgia Clark, you racists, you can’t run away and delete everything. KARMA HAS A KISS FOR YOU! @FortWorthISD pic.twitter.com/FkIVEm2HMb

The Fort Worth Independent School district board found out about the ignorant tweets she made and unanimously voted 8-0 to terminate her contract, less than a week after she was suspended. Fourteen people at the board meeting spoke against Clark’s continued employment, which not surprisingly enough, no one was in favor of keeping her. Honestly, I don’t blame them at all. She put these children, who are just trying to get an education, in major risk because she simply thought they looked Hispanic. Yikes.

According to a school district review, Clark, an English teacher at Carter-Riverside High School, has worked with the district since 1998. Upon investigation, she admitted the Twitter posts were indeed hers. On May 17, several tweets addressed to Mr. President stated that her school district was “loaded” with undocumented students from Mexico, referring to them as “illegal students.” She basically believed that her high school had been “taken over by them” and the “drug dealers needed to be punished” since the district wasn’t doing anything.

Who did she blame for the students remaining in the district? None other than her assistant principal, who she referred to as a “Hispanic assistant principal who protects certain students from criminal prosecution.” She then decided to end her series of inhumane tweets saying, “anything you can do to remove the illegals from Fort Worth would be greatly appreciated.” The teacher listed two private phone numbers, assuring Trump that she was using her real name.

This teacher works at a school that is over 80% Latino. https://t.co/DR8MJbDPUL pic.twitter.com/kSObAr9tjB

As expected, Clark later told investigators that she had received several messages and calls on those numbers, calling her a racist, which she had to file a police report due to being scared for her safety. But between you and me, did you really not see this coming? This woman was basically racially profiling students in her school.

Oh, but it doesn’t end there. On May 22nd, the teacher followed up on Twitter with another post directed to President Trump, reading, “I really do need a contact here in Fort Worth who should be actively investigating and removing the illegals that are in the public school system.? So yeah, this woman was begging for attention and asking for all the threats she could get. According to the School Board, Clark was disciplined in 2013 after referring to a group of students as “little Mexico,” and one student as “white bread.” Clark allegedly also told a student ?show me your papers, you are illegal,? assuming the students’ ethnicity after they asked permission to use the restroom.

Hey, @KentPScribner, I know FWISD has problems with teacher retention, but you could definitely do better than Georgia Clark. Might I recommend someone with DACA? https://t.co/JBDwskgybG

Even before being investigated for her Twitter posts, the Texas teacher was already being investigated after two students reported they deemed racist incidents with the teacher in May. Of course, Ms. Clark denied all accusations of making racist comments. But, not having it one bit, the board ultimately stated Clark violated the boards’ policies on social media and ethical conduct, referring to the post as “racially intolerant and/or insensitive”

District Superintendent Kent P. Scrivener reassured the community that every child in the district was welcomed and will be treated with dignity and respect, despite the debate over immigration status in the United States. Fort Worth, Texas has one of the nation’s highest Hispanic populations with almost 35 percent identified as Latino or Hispanic. According to the Fort Worth Star-Telegram, Fort Worth ISD has a nearly 63 percent Hispanic population. At Carter-Riverside High School the student body in 2018 was 87.5 percent Hispanic.