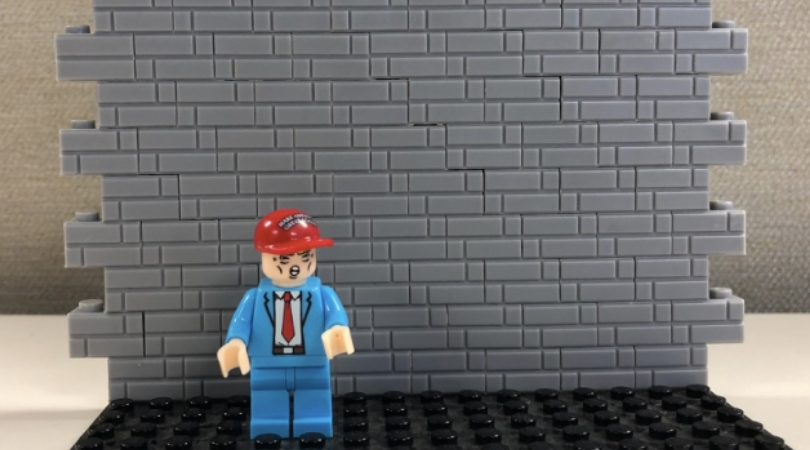 Hey people, did we not learn anything from last month’s chaos involving teachers and Trump’s wall? Well, apparently not because this company is offering a MAGA-branded ?Build the Wall? starter kit, that includes more than 100 Lego-like pieces.

The conservative website is called ?Keep and Bear? and is offering the $29.95 kit that includes black platform pieces, a series of gray brick-like blocks for the wall, and a President Trump figure wearing a red MAGA hard hat. The product has an accompanying text on the box reading, ?The wall must be built. The wall will keep America safe and strong. Only then will we be able to help those in need.?

The sites promotional language explains the motive behind the blocks, stating ?A mob of 10,000 Central American migrants is marching through Mexico and is heading toward El Paso, Texas. Mexican border agents attempted to stop them at the Mexican border but to no avail. In the interest of national security, however, we cannot allow just anyone and everyone to cross our borders.?

The kit is among a full list of Trump-related items on the website, including a ?Santa Trump? Christmas cards, a ?Make Christmas Great Again? book, and ?Trump 2020? camouflage caps. There is also a second Lego-like item called ?Trump Sends Hillary to Prison,? featuring figures of the two presidential campaign rivals. According to the website, these gifts ?make a great Christmas gift for your kids and grandkids!?

I know, I know what you?re thinking. It?s exactly what I thought when I saw the product. I mean, who in their right mind would buy this for their children? Well, apparently a lot of people..because let?s face it, this is America and well, unfortunately, there are a lot of free opinionated people out there.

Now, obviously whoever buys this must be just playing a sick joke on their friend or maybe doesn’t understand the concept of racism and narcissism. But honestly, I’m just waiting for LEGO to straight-up file a lawsuit here. I mean, whatever happened to regular standardized Legos? The world is a scary place, man.

Editors Note: This article was originally published on November 14, 2018.

Watch: Have A Chuckle Over The Hard time This Bald Eagle Gave Donald Trump