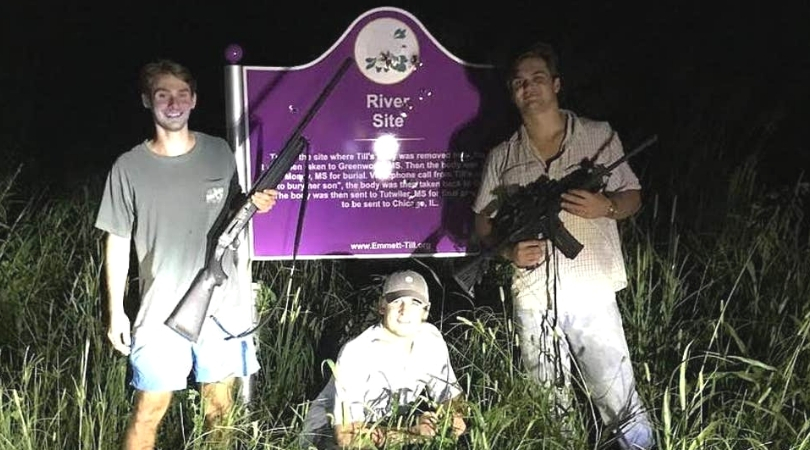 Disturbing images made their way around social media showing three fraternity members posing in front of Emmett Till Memorial, holding up guns. Emmett Till, who would have been 78, was lynched in Mississippi after begin accused of offending a white woman. The then 14-year-old’s brutal murder in 1955 has served as a catalyst for the civil rights movement.

The three University of Mississippi students have been suspended by their fraternity, Kappa Alpha Order, after the Instagram photos surfaced. One of the students posted the photo to his private Instagram account in March, which shows the trio in front of a roadside plaque that commemorates the site where Till’s body was recovered from the Tallahatchie River.

The photo was later obtained by the Mississippi Center for Investigative Reporting and ProPublica, which shows Ole Miss student, Ben Leclere standing in front of the bullet-pocked sign. His Kappa Alpha fraternity brother John Lowe is seen squatting below the sign, and the third fraternity member, who has not been identified, is standing to the side with an AR-15 semi-automatic rifle.

Last year, according to The Root, the memorial sign was erected in 2013 by Emmett Till Memorial Commission, which was vandalized multiple times, twice due to bullet holes. Authorities are investigating if the student shot up the memorial themselves or were simply posing next to it.

This fraternity considers Robert E Lee a "spiritual founder." These students shot at the Emmitt Till Memorial Sign, and then posed in front of it holding shotguns and AR-15s. And the University doesn't think they did anything wrong. https://t.co/gPbBjdM7tB

Days after the photo was published, an anonymous complaint was filed to the university’s Office of Student Conduct, which demanded the photo be taken down by the fraternity members. US Attorney Chad Lamar of the Northern District of Mississippi stated he has referred the photo to the Justice Department’s Civil Rights Division for further investigation.

The University of Mississippi has not taken action against the students due to the photo “not violating the University’s code of conduct” and was taken off-campus. However, the University said it did support Kappa Alpha’s decision to suspend the three white men involved. Unfortunately, this isn’t the first time students from the University of Mississippi are accused of racism. In 2014, thee Ole Miss stones, including a fraternity member, placed a noose on a campus statue of the school’s first black student and wrapped the statue with a former Georgia state flag with the Confederate battle emblem.