The mother of a grade R student from Laerskool Schweizer-Reneke in North West Province, South Africa is outraged after a picture surfaced online of her child and three other black children sitting separately from white children in their classroom.

The picture was shared on the school’s WhatsApp group by the children’s teacher, who has yet to be identified. The mother, who decided to remain anonymous to protect the identity of her child, stated her son’s first day in grade R (the South African equivalent of kindergarten) had started off smoothly. She and her parents dropped off their children and were later asked to leave the school premises. At 9 am, they all received an update from the teacher on how their day was going via the WhatsApp group.

Of course, perceptions vary on what an image means, but they say that pictures do speak a thousand words. In this case, the picture shows 18 white children in the classroom, occupying a large desk in the middle of the room. Four black children are also seen in the corner, occupying one desk at the far end of the classroom.

The mother was concerned after no one was saying anything from the separation of the children. She said after discussing with another parent outside the group, that parents contacted the school principal to ask about the seating arrangements, but the principal said she was not aware of the situation.

NO words can justify my thoughts on this. The school should be ashamed. They are creating division.

When asked how the situation made her feel, the agitated mother said she was more than angry and didn’t know what further steps to take. Luckily, she said the child was only 5-years-old and was still too young to notice what was happening. As for the picture, it was since gone viral on social media. Several online users responded to the picture, saying they were ashamed, claiming racism was the cause of the root and want an explanation. Unfortunately, the school hasn’t released any statement in regard to the incident.

This article was originally published on January 9, 2019. 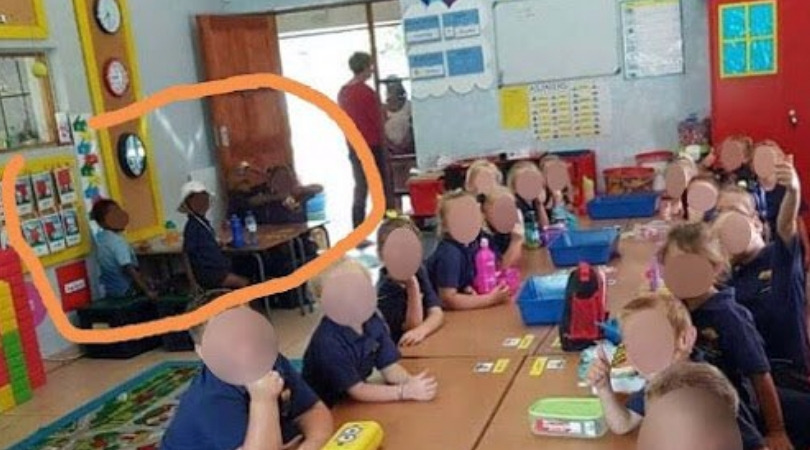 More From: Race in America