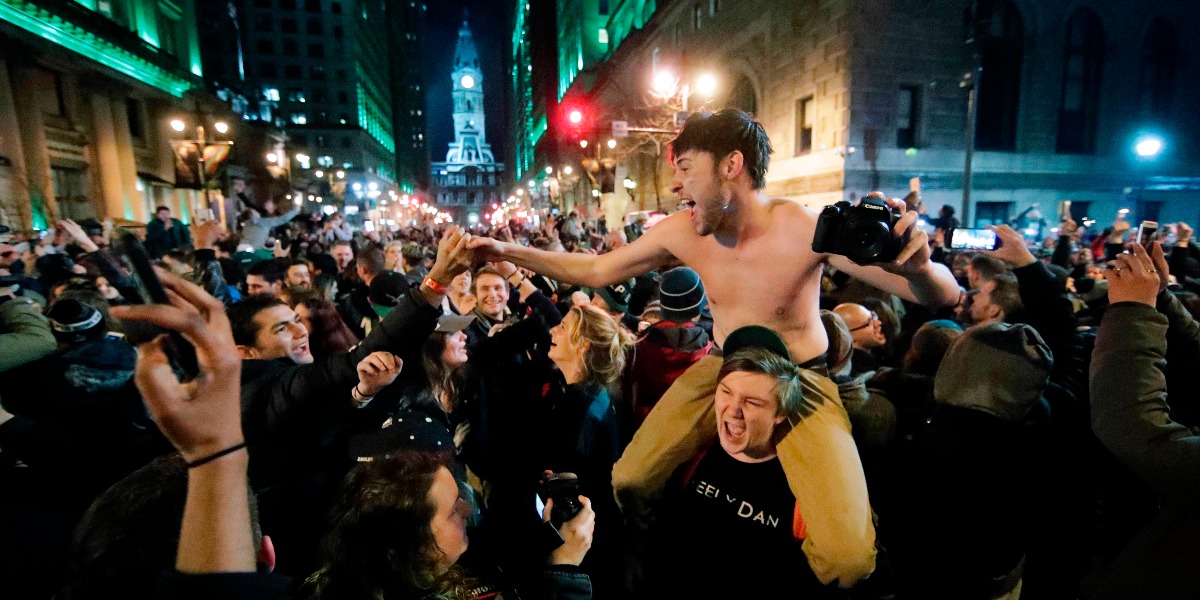 Anytime rioting has broken out in the wake of police brutality incidents in recent years, it doesn’t take long for my social media feed to fill up with one word: “Thug.”

But when Philadelphia football fans rioted in the streets after the Super Bowl to celebrate the Eagles’ victory Sunday, I didn’t see that word used. Sure, some on social media shared stories of how ridiculous it was that these people were jubilating through vandalism, but at no point did I see anyone call it “thuggery” or anything nearly as venomous as usual regarding other rioting.

Somehow, it seems there’s a line drawn in the sand where destruction of property because of a sports victory is OK and acceptable in America. However, if you have people who are fighting for their most basic human right, the right to live, they will be condemned.

Why, exactly, were the many people breaking the law and destroying private property in Philly – the majority of them appearing to be white – received differently in the public mind compared to the unrest we saw in Ferguson, NYC and Baltimore?

Look at the pictures. Watch the videos from Sunday night. They are being celebrated across the country for sheer entertainment value. They are a joke today, cannon fodder for pointing out how dumb some sports fans act. Take a closer look, though. In all of the wildest scenes celebrated on social media, the pole climbers, the awning jumpers, the car flippers, the fire setters, the people who pulled down all those street lights in Center City were mostly white.

I just got hit with a parking light pic.twitter.com/FflzyY5JDe

RELATED: It’s probably a bad idea to leave anti-terrorism plans for the Super Bowl in your airplane seat

What other tangible difference is there between the Philly football rioters, and those we’ve seen in other cities of different racial backgrounds? How do we conclude anything other than if majority-white crowds want to riot over football, that’s generally okay, but if minorities do the same in anger over a police shooting, that it’s not?

This is not a defense of rioting. Protests can serve a purpose, but violence against people or property is bad and should be discouraged.

Yet, only three people got arrested in Philly last night. That’s it. For riots, that number is unusually low.

Critics of black protesters often ask why those who want to raise consciousness about police brutality can’t do so peacefully?

You mean like taking a knee at a football game?

Why couldn’t the Eagles fans who filled the streets have cheered peacefully? Without resorting to thuggery?

Then there’s irony squared: How many of those rioting football fans do you suppose have complained about NFL players taking a knee during the national anthem to oppose police violence?

I wonder if any of these people kicking this torn down stoplight have ever been bothered by all the kneeling:

I don’t know what else to say. The evidence is abundant and clear.

The head of one Black Lives Matter chapter sees a clear racial double standard. So do others. I do too.

How are we wrong?