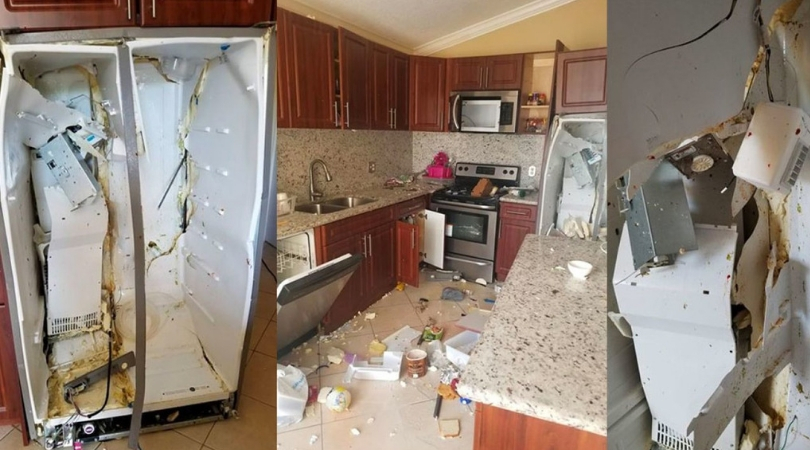 A family in Florida got the scare of their lives after their Whirlpool refrigerator exploded inside their home Saturday morning. According to Mark Ligondie, the refrigerator caused a significant amount of damage to several rooms in the home. Luckily, their next door neighbor, Joshua Perez, heard the explosion and quickly ran inside the house to help the family get out safely.

Ligondie said he was asleep in his room when he heard a loud bang. He quickly ran from his bedroom to the kitchen, where he saw the refrigerator had been blown apart with fumes coming out from everywhere. The odor from the fumes was so strong, Ligondie said they made his eyes sting. The fridge managed to expand, bending the metal of the stove.

What was odd to the family was the fact that their refrigerator was only four months old. Luckily, no one was hurt and the fire department showed up and cleared the home. Ligondie believes the incident is a wake-up call for all homeowners, stating one can never be too careful when it comes to kitchen appliances. Unfortunately, the home suffered significant damage, including several cracks in the ceiling and in nearby walls, as well as heavy damage to the master bedroom, and a bedroom window is missing.

Whirlpool released a statement saying they are committed to providing safe products for consumers and are working quickly to look into this incident.

So how exactly can a fridge explode? Well, inside the fridge is a compressor that constricts a gaseous refrigerant inside pipes in the walls of the fridge. This causes it to raise the coolant’s temperature and gas to pump into radiator-like fins. These conduct the heat, and as the coolant’s temperature drops, it turns to liquid. As the temperature of the coolant rises, it becomes gas. So, as consequence, the back of the fridge can get extremely hot, which can ultimately cause overheating, and become a fire hazard.

Yup. You learn something new every day.