Rep. Frederica Wilson reignited her beef with President Trump and John Kelly — “he lied about me” 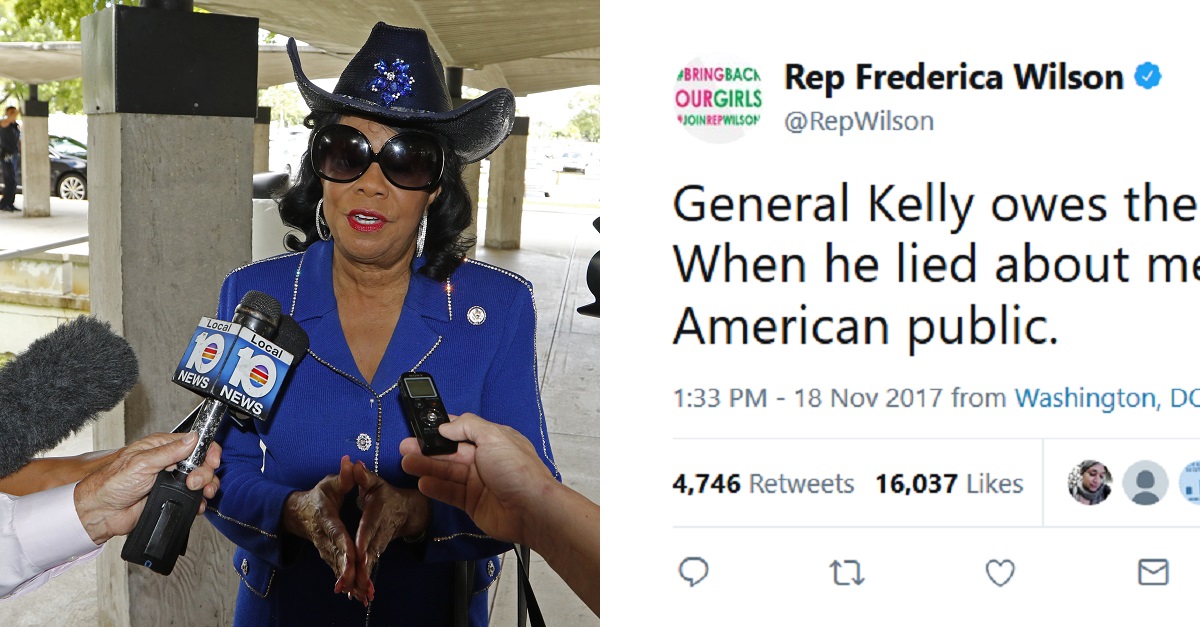 In a tweet posted yesterday, Florida representative Frederica Wilson reinvigorated last month’s argument about a phone call to Myeshia Johnson, the widow of Green Beret Sgt. La David Johnson, who was killed in an attack in Niger on Oct. 4.

General Kelly owes the nation an apology. When he lied about me, he lied to the American public.

In October, Rep. Wilson was first to allege that President Donald Trump called Myeshia Johnson to offer condolences and said that the Green Beret “knew what he signed up for.” Rep. Wilson was in the car with Johnson when the two were en route to meet Sgt. Johnson’s body, she said, and heard the call on speakerphone.

Trump denied that, accusing the “wacky” Congresswoman of lying “on content” and “SECRETLY” listening to the phone call. He also said that Wilson was “killing the Democratic Party.”

White House Chief of Staff John Kelly defended the president in the fray, bringing up a claim that Rep. Wilson once dedicated a speech at an FBI Field Office and took credit for being “instrumental in getting the funding for that building.” Kelly claimed that Rep. Wilson didn’t mention the FBI agents killed in the line of duty who the building was named for — a claim that was proven wrong by video of the ceremony.

When she broke her silence, Myeshia Johnson confirmed that President Trump said her deceased husband “knew what he signed up for” and said he appeared to forget her husband’s name.

“I heard him stumbling on trying to remember my husband’s name, and that’s what hurt me the most,” the widow told “Good Morning America” in her first interview since the spat over her dead husband began. “If my husband is out here fighting for our country, and he risked his life for our country, why can’t you remember his name? That’s what made me upset and cry even more.”