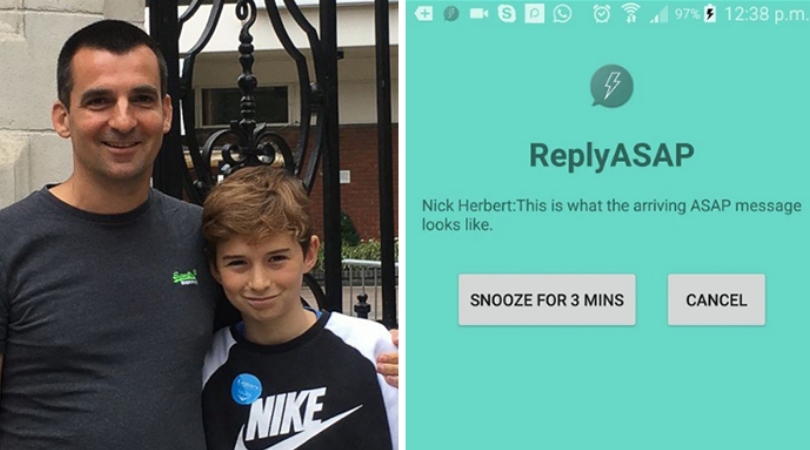 Parents will really do anything to make sure their children listen to them. It’s really amazing, and terrifying at the same time. First, it was parents tracking their children by using ankle monitors, then it was the phone GPS trackers, and now, well, this one takes the cake!

Fed up with his 12-year-old son’s inability to respond quickly to his text messages and phone calls, Nick Herbert came up with a rather unusual solution to help him out. The dad, who is a product manager in the UK, came up with “ReplyASAP”, an app that allows you to send urgent texts that can’t be ignored. Let me tell you, at first, I was kind of iffy of this whole app situation thing. I mean, basic human rights and all that. But hey, you gotta do what you gotta do, right?

Herbert said he wanted to set up a text that sends an alarm to Ben’s phone even when it’s on silent. So, naturally, he hired a friend to help develop the app, that sends urgent messages that can’t be ignored without the sender knowing it. In order for the alarm to work, the parent must download the app and invite the child to also download it. After the child accepts, both parties can start sending each other “ASAP messages” back and forth.

Whenever an “ASAP message” is delivered, the app takes over the screen, interrupting whatever the recipient is doing on their phone. The alarm will then ring, even if it is set to silent mode. In order to stop the alarm, the recipient has to “hit snooze for 3 minutes” while replying or hit “cancel” to exit the tab. The sender will then get a notification, depending on the option the recipe chooses.

Of course, Herbert says the app isn’t meant to “bug your children”, rather it should be used for emergencies. “I told my son, ‘If you want to make it urgent send me one of these. If you want to know where some socks are, send a text message and I can reply when I can,'” Herbert said.

After an 8 month development, the app became available to Android users and an iOS version for iPhone users is expected to launch in the app store in the coming weeks. Some reviews on Google Play Store have reported problems getting access, but Herbert says the bugs have been fixed and it is ready to use.

While the app was created with parents and children in mind, Herbert hopes the app will expand outside families. So yes, we can totally use the app for the wrong reason, because honestly, who wouldn’t?

BRB, making my friend download the app so I can send them a very important message while they are at the bar, forcing them to get me a drink or I’ll keep freezing their phone. Thanks, Herb!