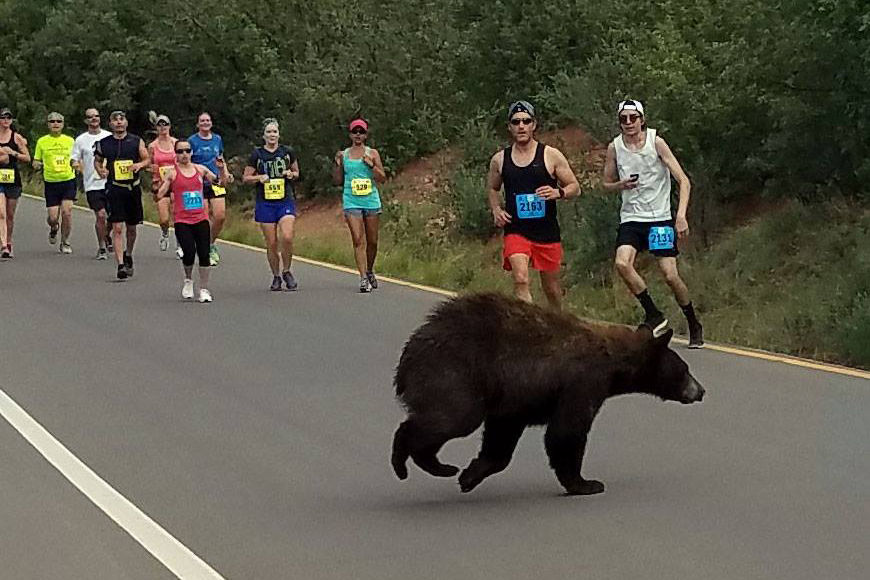 The participants of the “Garden of the Gods 10-Mile Run” in Colorado Springs, Colo., were in for a big and unwelcome surprise, as a brown bear seemed ready to cheat his way into first place.

One of the pictures was perfectly timed and shows a couple of the runners breaking stride as they recognize that, you know, there’s a bear in the road.

?Why did the bear cross the road? To scare the runners and make me lose precious time in the middle of a race!? Sanborn said on social media.

Fortunately for everyone involved in the ten-mile race no person’s leg was gnawed off and turned into a hungry bear’s dinner. The guy simply scampered across the road and went about his day. Also lucky this was just a brown bear and not a Grizzly Bear which, admittedly do not occupy that area of the United States so these people didn’t have to worry. A brown bear is still usually worse to encounter than a black bear, however. (Better than a mountain lion though!)

Presumably nobody thought to bring any bear spray with them so when this big boy popped u ponto the road everyone probably felt pretty helpless. You can see the fear of the runners on a couple faces. None of the trail runners opted to play dead though. They took the wild animal somewhat literally in stride.

This article was originally published June 11, 2017.