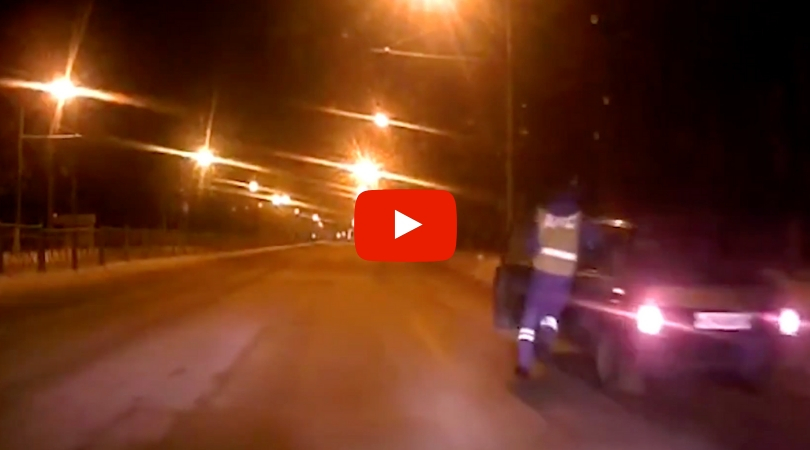 Talk about a true hero. A Russian traffic inspector in Mari El, Russia jumped into a moving car to stop a drunk driver who was attempting to escape a traffic stop after entering a skid in the middle of the roadway. To make things even better, it was all caught on video, which as released by the Russian Ministry of Internal Affairs.

The video was captured by the dashcam of the patrol vehicle and was posted on the ministry’s Twitter page. Video shows the officer approaching a vehicle that was pulled over for making a U-turn. That’s when the car starts to drive away, probably because the person knew he had messed up.

After a brief chase, the officer, Junior police lieutenant Andrei Ivanov, manages to physically open the left front door of the car and jumps inside the suspect’s car. Yes, whoever trained this officer definitely did it right. A second police officer is then seen running in pursuit of the vehicle.

The brave officer who decided to take action to avoid a terrible accident had managed to stop the vehicle, and the two officers detain the intoxicated driver after a brief struggle and lots of back and forwards. Believe it or not, the driver was actually a 16-year-old boy and was driving without a license. Yes, the teenagers strike again.

The question here is, how were they both able to fit behind the steering wheel? I mean, this cop must have literally sat on top of this kid and stomp on the brakes and his feet all at once. Also, I can’t believe this kid was only 16. Where are you parents? Aren’t you supposed to be at least 18 to get a driver’s license? Yikes.