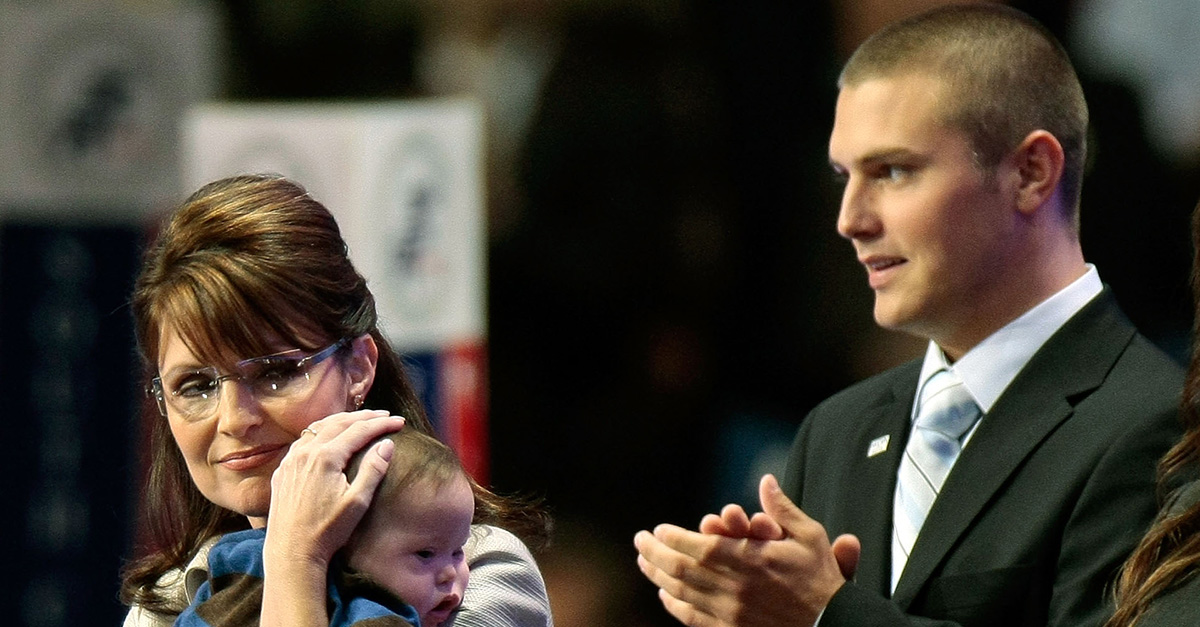 Sarah Palin has some new family trouble on her hands.

According to court documents, Track Palin — Palin’s eldest son of five children — was booked in Wasilla, Alaska, where his mother once served as mayor. In addition to the two felony counts, he also faces a charge for misdemeanor criminal mischief. He reportedly caused nearly $1,000 worth of damage in a domestic violence incident.

The family’s attorney John Tiemessen issued a statement regarding the incident, although the victim involved was not identified.

He said, “Given the nature of actions addressed last night by law enforcement and the charges involved, the Palins are unable to comment further.”

“They ask that the family’s privacy is respected during this challenging situation just as others dealing with a struggling family member would also request,” Tiemessen continued.

RELATED: Hours before his mother jetted off to support Donald Trump, police say Sarah Palin’s son did this

This arrest marks the second time Track Palin was busted for an alleged domestic violence altercation. The Army veteran was arrested in January 2016 for threatening to shoot himself with an AR-15 after he punched and kicked his girlfriend in a drunken tirade, police reports alleged.

Documents of that incident say that officers responding to the scene discovered Jordan Loewe, the girlfriend, cowering under a bed after calling 911. Track Palin was arraigned on three misdemeanor charges — fourth-degree  assault, interfering with the report of a domestic violence crime and possession of a firearm while intoxicated.

Prior to the altercation, Loewe reportedly filed for full custody of the couple’s then-newborn son Charlie, citing “domestic violence” as cause, according to the Daily Mail.

RELATED: Sarah Palin is backtracking after her blog criticized Colin Kaepernick’s $50,000 donation to Meals on Wheels

Sarah Palin discussed the incident during a stop on Donald Trump’s campaign trail. She called it the “elephant in the room” and pointed to it as a symptom of PTSD and lack of veteran care under the Obama administration.

“My son, like so many others, they come back a bit different, they come back hardened,” she said. “They come back wondering if there is that respect for what it is that their fellow soldiers and airmen and every other member of the military so sacrificially have given to this country,” she added. “And that starts from the top.”