“Saturday Night Live” finally roasted its own Al Franken, but they weren’t as harsh as some hoped 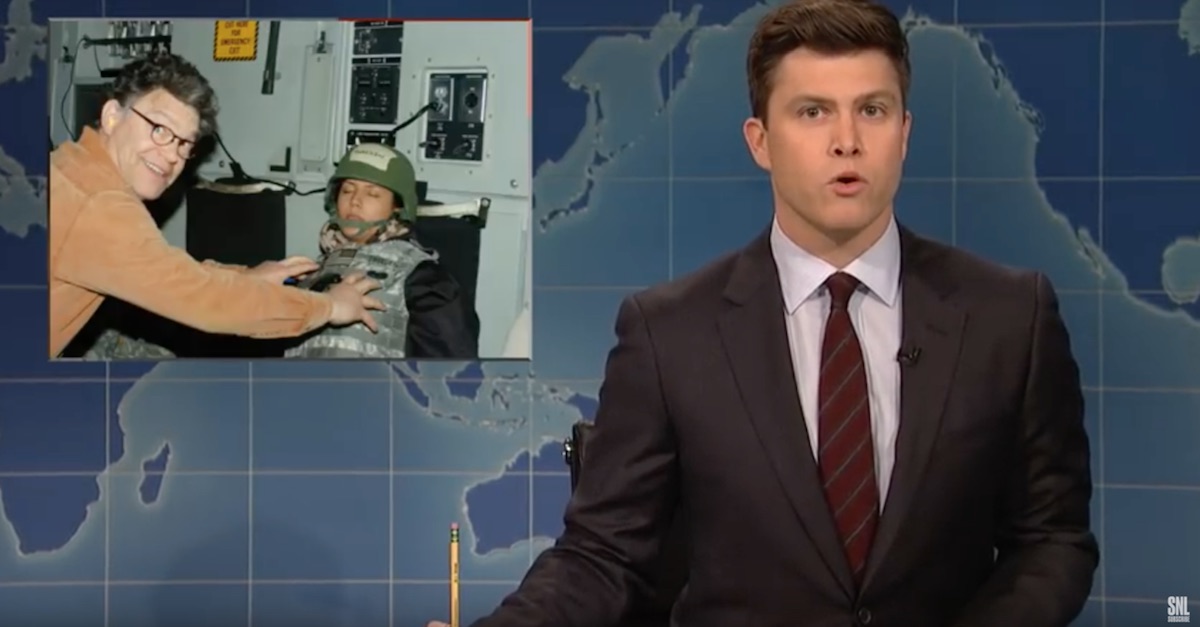 “Saturday Night Live” didn’t shy away from the sexual harassment scandal that has engulfed “SNL” alumnus-turned-U.S.-senator Al Franken, but it also didn’t bring as much heat as many expected.

SNL’s “Weekend Update” did the honors, with co-anchor Colin Jost offering, “I know this photo looks bad, but it also is bad,” as the now-infamous picture was shown of Franken mock-grabbing the breasts of an unconscious Leeann Tweeden, the Los Angeles radio host who came out recently with the allegations against Franken.

The photo was taken about 10 years after Franken’s departure from “SNL” and a few years before the Democrat from Minnesota became a senator.

“I know this photo was taken before he ran for public office,” Jost said, “but it was also taken after he was a sophomore in high school.”

Before moving on to other news on “Weekend Update,” Jost’s co-anchor Michael Che added, “And without even looking you can bet President Trump called out Al Franken, and not Roy Moore, who’s accused of way worse, by the way.”

Moore is the Alabama Republican running for senate against Democrat Doug Jones in a special election on Dec. 12. Moore has been accused by multiple women of predatory behavior and unwanted sexual advances, including by woman who was 14 years old at the time.

Some critics say the show didn’t spend enough time skewering Franken, since it previously devoted an entire sketch to Moore and has been going after celebrities accused of sexual misconduct.

“Face the Nation” producer Timothy Perry noted that instead of “SNL” writing a sketch around Franken for the cold open, it instead went after the president’s sons, Donald Trump Jr. and Eric Trump, in a meeting with WikiLeaks founder Julian Assange.

Perry expressed outrage on Twitter that “SNL” had not even made mention of Franken through four segments of the show.

Other former “SNL” cast members were split on how they viewed the Franken situation and what the show should or should not do, the New York Times reported. At least three stood up for him, according to the report, including Jane Curtain, who was a contemporary of Franken’s during his time on “SNL.”

She likened the accusations to “the red menace” panic against communists and worried about “good people being dragged into it.” However, others felt differently. Late-night host Seth Meyers called the photo of Franken and Tweeden “horrifying.”

All in all, the Franken segment on “Weekend Update” amounted to four jokes that spanned 70 seconds.