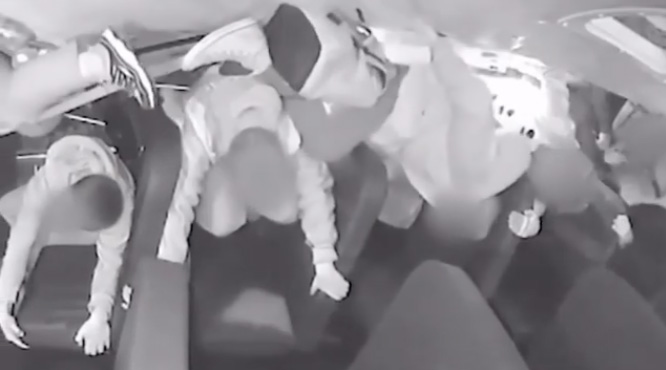 A school bus Northern Local School District traveling in Perry County, Ohio near Thornville was struck by a Ford Mustang that ran a red light and then hit a guardrail before overturning. The Mustang also rammed into the guardrail after hitting the bus.

Video from inside the school bus, which was traveling to Mid East Vocational School in Zanesville, Ohio, shows the students jostled by the initial impact before going completely airborne and slamming into the bus’s roof once the vehicle overturned. The kids can also be heard screaming for help and (rightfully) asking what the hell had just happened.

At the time of the accident, authorities say there were 25 students on the bus. 8 of the students were taken to the hospital with non-life-threatening injuries. The driver of the Mustang, who police say was driving with a suspended driver’s license, was seriously injured in the accident. The Perry County prosecutor is reviewing the case to see what charges may need to be filed.

1. Considering all the kids are okay at least they got a pretty good story out of these terrifying 60 or so seconds. Seems pretty worth it to be honest. You can tell all your friends you stared death in the face and didn’t even scream that much.

2. Is there a worse motor vehicle to be in an accident in than a school bus? Maybe like a Smart Car that’s so small it pretty much implodes upon contact with… wind, but that’s about it. No seatbelts and plenty of room to get tossed around until your neck is in the shape of an L puts a school bus pretty high on my list of modes of transportation I never want to be in an accident while traveling in. (Plane still takes the top spot, obviously.)

Watch: Massive Dog Waits Every Morning to Make Sure His Owner?s Tiny Kids Get on the School Bus Safely