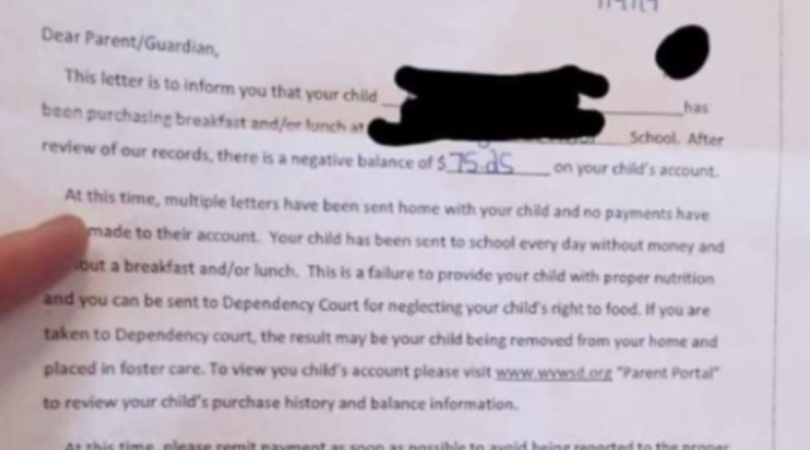 An eastern Pennsylvania school is under fire after sending letters to parents demanding they pay their school lunch debt or risk having their children placed in foster care! The letter was posted on social media, in this case, a parent was informed that their child had a balance of $75.25 and if they didn’t pay the parents could be reported to Luzerne County Dependency Court.

The letter read, “Your child has been sent to school every day without money and without breakfast and/or lunch. This is a failure to provide your child with proper nutrition and you can be sent to Dependency Court for neglecting your child’s right to food.”

If the parent is taken to court, they risk their child being removed and placed into foster care. The parent was asked to pay as soon as possible to avoid being “reported to the proper authorities.” The letter was signed by Director of Federal Programs for the Wyoming Valley West School District, Joseph Muth.

According to WBRE, the district is trying to collect over $20,000 worth of lunch debt. David Pedri, Luzerne County Manager condemned the school district for using the foster care system as a scare tactic. Though a statement, Pedri noted, “Foster care is to be utilized only when absolutely needed ? when a child has been abused, is in need or has suffered a tragedy. Our foster care system is NOT to be utilized to scare parents into paying school lunch bills.”

The county asked the public school t to retract the latter. As expected, Luzerne County Children and Youth Services Executive Director Joanne Van Saun, said she was highly disgusted by the letter, reassuring that the agency does not remove children from their homes because of any unpaid bill or school lunch debt. The school district responded saying they will send another “softer letter” to parents about their unpaid lunch bills.

Honestly, this is ridiculous. How and why would a school tell and threaten parents that they are going to send their children to foster care? Over $75! I get that they want people to pay, but this is wrong. Whoever came up with that idea should go to jail. Have you ever thought about how this could affect low-income families?