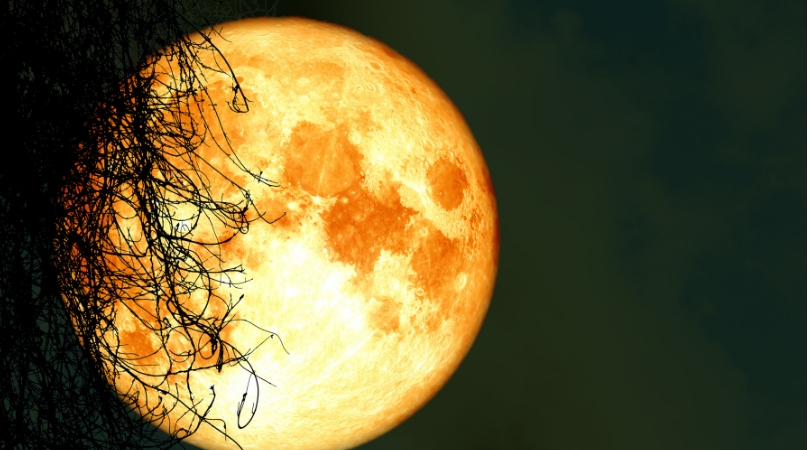 Spooky season has arrived and I am ready to go around town and collect some candy…despite it only being September! The full moon closest to the Fall Equinox, known as the harvest moon, is set to rise on the night of September 13, which only happens to be Friday the 13th. Yes, someone call Jason and tell him that he can come out now!

A harvest moon is a full moon that usually occurs around the autumnal equinox. Although September 23 is technically the first day of fall, it can sometimes slide into October in the Western Hemisphere. A harvest moon rises about 25 minutes after the sun sets in most of the northern United States, 25 minutes earlier than a typical moon. Meaning, yes, this brings in extra light in the evenings.

✨🌕The energy of the Harvest Moon lingers tonight and over the following couple of days. 🌕✨ It’s a great time to reflect upon the next two weeks and month, and what you want out of this time. Start a dream journal, keep track of the progress of your goals, and take time for yourself. 💜 Book a full moon reading at ChosenEyes.com! ♎️

It’s definitely rare to see a full moon rise on Friday the 13th. According to the Farmer’s Almanac, the last time a full moon appeared on Friday the 13th was on October 13, 2000, and is not expected to happen again until August 13, 2049. The harvest moon gets its special name because around this time of year, farmers begin to harvest their crops. Before tractor lights existed, farmers used the light of the full moon to help them see at night.

Around this time of year, the moon usually begins to rise in the twilight hours. So, if you catch the moon as it is rising from the horizon, it will appear larger than normal due to an optical illusion. You might even see a tint of orange since the atmosphere is the thickest from a horizon perspective. According to Time and Date, “micromoons” are usually more than 251,665 miles away from earth.

The Pisces Full moon happening this Friday the 13th won’t happen again until 2049, rare energy so you know it’s going to be positively life changing. Exciting things to look forward to.

This time around, Friday’s moon will be 806 miles farther than that! So, this year’s harvest moon will be “mini” since it will occur during the apogee, also known as the point in the moon’s orbit when its farthest from Earth appearing 14 percent smaller than your average full moon.

The full moon “won’t technically” reach its peak illumination until 12:32 a.m. Eastern Time Zone on Saturday, but it is still considered full Friday night due to practical purposes. But, the full harvest moon will rise just after sunset. So grab those blankets, you’re pumpkin spice latte and enjoy a spooky night out looking at the night sky with your friends and loved ones. Time to get all those spices and crystals, witches. It’s your time to shine!