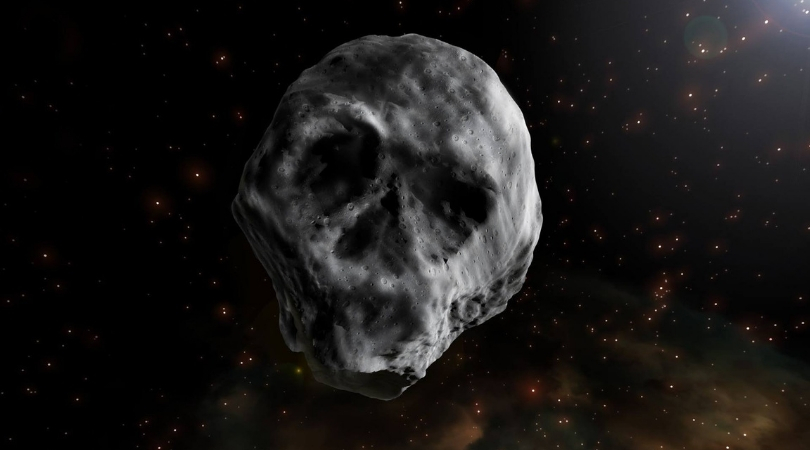 It looks like Halloween is taking itself seriously this year. NASA is predicting that an asteroid nicknamed ?The Death Comet? will make its way to Earth. No, this doesn’t mean the apocalypse is coming so all you end-of-the-world worriers can take a breath. The asteroid received the (confusing) nickname due to radar images resembling a spooky, skull-like appearance. The asteroid doesn’t pose a threat. It will pass us by at a safe distance of 38.6 million km (24 million mi) from the surface, which is its closest pass by Earth as of yet. So, as spooky as the name is, there is no reason to worry.

The asteroid was discovered on October 25, 2015, after NASA tracked a strange-looking object, making the closest flyby it has made since 1999. Also known as asteroid 2015 TB145 (The other name is way better, btw), was monitored by several observatories and radar inclinations of the Deep Space Network agencies. Because of the timing and the skull-like appearance, scientists named the asteroid ?Death Comet,? also referring to it as “The Great Pumpkin Comet,” which is a bit more cheerful but still seasonally festive.

Just like the one occurring this year, in 2015, the asteroid possessed no risk to earth as it passed within 498,900 km of Earth. It was first discovered by Panoramic Survey Telescope and Rapid Response System (PANSTARRS-1, part of the Near-Earth Objects Observation (NEO) program located atop the dormant Haleakala volcano on the Hawaiian island of Maui. With a diameter of 2,000 feet,  is too small and too far away to be seen with the naked eye, but radar images showed the human skull like space rock.

The reason it was determined to be a ?dead comet? was because it sheds its volatile elements (frozen water, ammonia, methane, carbon dioxide, etc.) after numerous passes around the sun and no long emits a tail, making it an extinct comet. The asteroid will make its closest pass to Earth on November 11, 2018, reaching a distance on 8.6 million km from the surface. Roughly one hundred times the average distance between the Earth and the Moon, or a quarter of the distance between the Sun and the Earth.

Back in 2015, NASA?s Near-Earth Object Observations Program predicted the asteroid would return in 2018 after tracking the comet’s orbit. The next closest pass will take place on November 1, 2088, with a distance of just 8 million KM. What a perfect way to celebrate Halloween this year, huh? Mother Nature is surely wonderful.

Watch: Have You Ever Heard of Moon Drop Grapes?