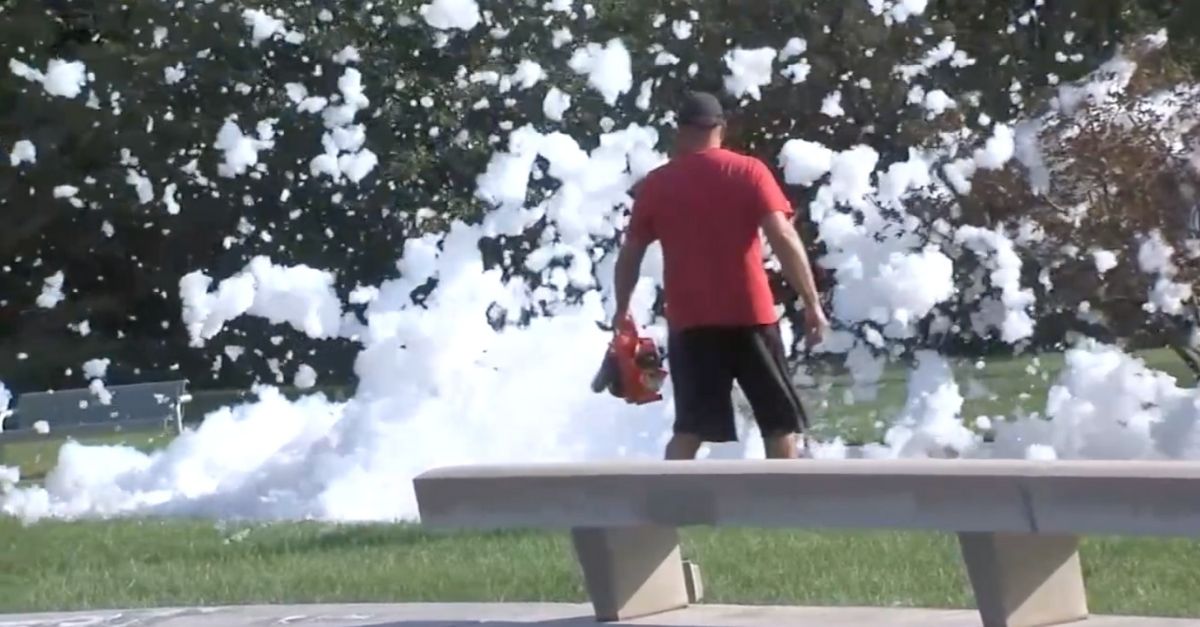 Via 6ABC
Via 6ABC

A memorial fountain in Bucks County for the victims of September 11th is being cleaned by Lower Makefield Township crews after someone poured large amounts of soap into the water. According to Lt. Jason Braim of the Lower Makefield Police Department, someone dumped a few gallons of dish detergents inside, which created a bubbling mass to the entire width of the fountain itself, which came out to a total of five feet high.

The fountain currently sits in the Garden of Reflection 9/11 memorial in Pennsylvania surrounded by the names of the 2,973 people killed in the terrorist attacks, eight of whom lived in Bucks County. This is the second time the fountain at the memorial park has been filled with soap suds. Cleaning crews dealt with a similar issue sex years ago. Paying respect to the families, Lt. Braim stated, “This location should not be disturbed a total lack of respect for what this fountain stands for as a monument. Families are going through a very difficult time this time of year.”

This is absolutely disgusting behavior. I hope they get whomever did this. Despicable human beings. Sept. 11 terror attacks: Memorial to victims vandalized in Yardley, Pennsylvania | https://t.co/c6SowobET0 https://t.co/SUestvjB7c

Luckily, Lower Makefield Township Police officers believe surveillance in the area may help them identify vandals who will most likely face criminal mischief charges. Cleaning crews are power washing the soap from the crevices and cracks on the fountain floor so it can be restored for a COVID-19 socially distanced ride by a memorial procession taking place on September 11. The Garden of Reflection will continue to honor those killed in New York City, Washington D.C., and outside of Shanksville.

The community can pay their respect starting at 7 p.m. inside the memorial at 1950 Woodside Road. Visitors will be able to see some remains of shattered World Trade Center fragments, water fountains that symbolize hope, and participants can listen to several pre-recorded speeches from clergy and family members of 9/11 victims from their car radio.

9/11 MEMORIAL VANDALIZED: Someone poured a few gallons of dish detergent into a September 11th memorial fountain in Lower Makefield Township. Police believe this was an insensitive, ill-timed prank. @6abc pic.twitter.com/imACJTAoCJ

This year, both President Donald Trump and Democratic challenge Joe Biden will commemorate the 19th anniversary of the attack in rural Pennsylvania, where one of the hijacked planes crashed. This is the second time Trump will honor September 11 with a visit to the site. He previously visited the Pentagon in 2017 and 2019. Six months after the Coronavirus pandemic forced the 9/11 Memorial Museum to close, the attraction is set to reopen on the anniversary, first to those who lost a loved one during the terror attacks and then to the general public.