A 70-year-old teacher at Sutter Middle School in Folsom, Calif., has retired after a complaint about his display of a Confederate flag in class.

It was the second time a parent had complained about Woody Hart’s conduct in class.

RELATED: A Florida student is in trouble with his school for flying the Confederate flag on his truck

According to the Sacramento Bee, the Confederate flag was across the classroom from a Union flag and was “potentially going to be used, along with the Union flag, for a history lesson.”

The Folsom Cordova Unified School District announced sanctions on Facebook in advance of the retirement, explaining the decision, “We recognize that regardless of context, to many of our students, families, and staff, the Confederate flag is a racist symbol of hate.”

UPDATE TO COMMUNITY ON INCIDENT AT SUTTER MIDDLE SCHOOL: Sutter Middle School families were informed today about a serious allegation regarding one of its staff members. Late last night, the District was notified that a teacher had hung a Confederate flag in his classroom. This teacher was previously the subject of a complaint for making an inappropriate lynching analogy during a lesson in November.

Due to the seriousness and troubling nature of the allegation, we have placed this teacher on paid administrative leave while the school and District conduct a thorough investigation.

We recognize that regardless of context, to many of our students, families, and staff, the Confederate flag is a racist symbol of hate. Although this matter is under investigation, it is important to reiterate: Any employee who is found to engage in behavior that creates an unsafe environment for students will face full consequences, including the possibility of initiating termination proceedings.

In this case, the flag – which was found across the room from a Civil War Union flag, potentially in preparation of a history activity – was removed from the classroom before school began today.

It is our schools’ responsibility to provide a safe learning environment for all children. Sutter Middle has begun a new project in which staff are working with an outside coach to facilitate student-led discussion groups. This will help the school better understand its experiences and how students and staff can work together to contribute to a positive climate. The District, as well, is developing a plan to address how our teachers, staff members, and administrators can improve culturally responsive teaching and leadership practices.

We will provide updates to the community as soon as they become available. If you have any questions or concerns, please don’t hesitate to contact the District at 916-294-9000 ext. 104530. And thank you for your continued partnership to create a positive environment for all of our learners.

As mentioned in the statement, there was a complaint against Hart in November 2016 about a lynching analogy made in the classroom.

“When you hang one black person, you have to hang them all [as] that is equality,” Hart said while how states treat individuals under the U.S. Constitution. A student had asked for a definition of equality and Hart gave this analogy.

Hart later apologized and explained that he was trying to make the lesson “interesting.”

Thirteen-year-old Tyler McIntyre, the only black student who was in the class at the time, was offended by the analogy.

RELATED: This former police officer is suing after she was fired for flying a Confederate flag

School Board president Zak Ford announced that the board accepted Hart’s retirement and that he would not return to the classroom. 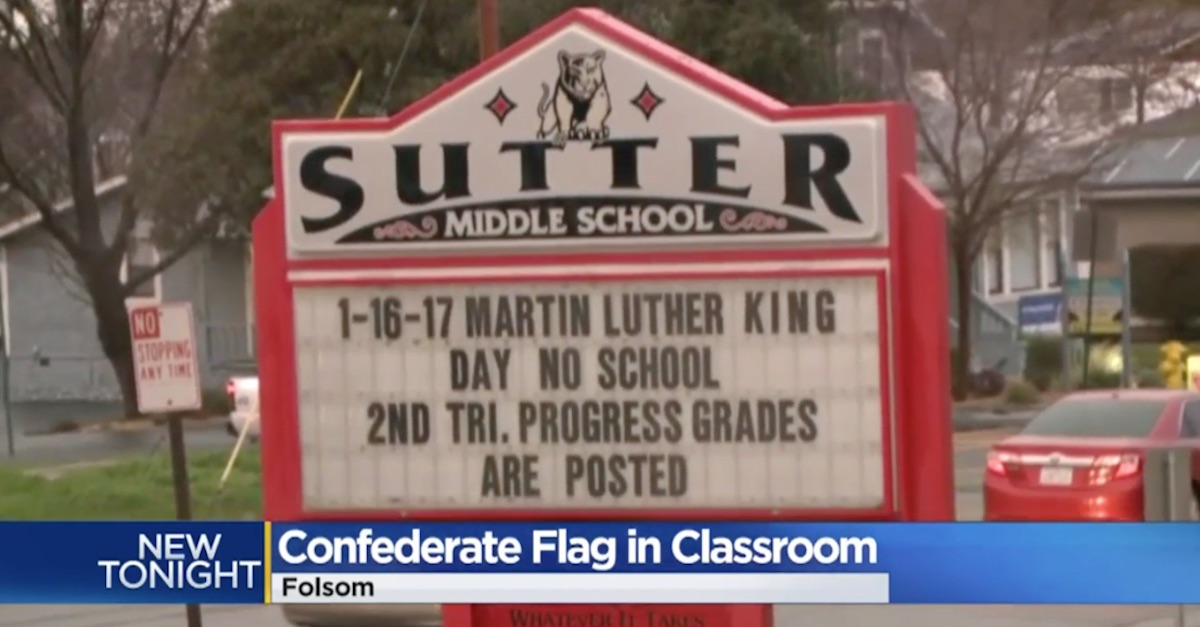