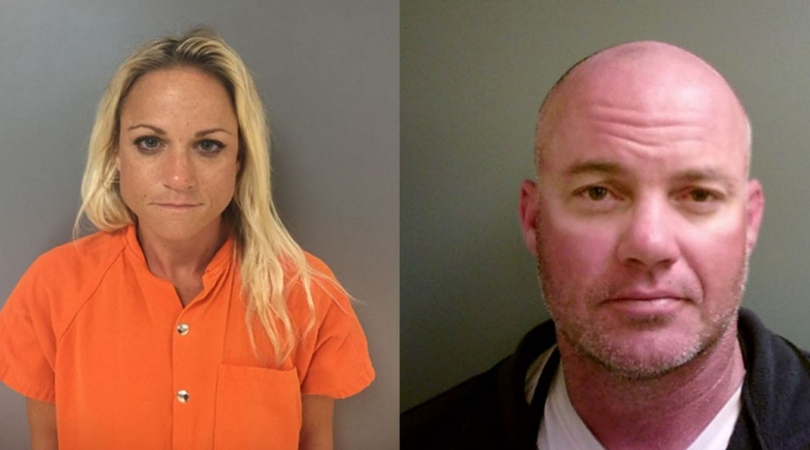 It was shocking for the Livingston Parish Sheriff’s Office to have to arrest one of their decorated officers and his wife for such heinous crimes. On Tuesday, December 17, 2019, Dennis and Cynthia Perkins were indicted by a grand jury on a total of 150 felonies, enough crime to send them to prison for 6,000 years. The majority of their actions were sex crimes against children.

His wife, Cynthia Perkins, was found guilty of 61 counts of producing child pornography, 4 counts of sexual battery of a child under 13-years-old, 3 counts of first-degree- rape, and 1 count each of attempted first-degree rape and mingling harmful substances. Her total is 72 felonies.

According to WFAB, mingling substances meant forcefully feeding the victim a substance that is not food. In this case, the couple was mixing Dennis Perkins’ sexual fluids in items that the couple would give to people they interacted with. Keep in mind, Cynthia Perkins was a school teacher.

The plot thickens as the grand jury indicted a third perpetrator, Melanie Curtin, on Tuesday, March 3, 2020, in relation to this case. Police picked Curtin up on February 1, 2020, after she got off of a cruise ship in New Orleans, Louisiana. Curtin is being charged with 2 counts of aggravated rape and video voyeurism. She’s being accused of videoing an adult victim without consent “to the specific instance of observing, viewing, photographing, filming or videotaping, and for a lewd and lascivious purpose.? She was released after posting a $350,000 property surety bond.

The Livingston Parish District Attorney’s Office is handing over the prosecution of Melanie Curtin to the Attorney General’s Office.https://t.co/QuD0R7XEkI pic.twitter.com/LgXh401UAA

Yikes! A Livingston Parish Sheriff’s Office deputy and his wife, who happens to be a school teacher, have been arrested and are accused of child rape and the production of child pornography among other disturbing charges. According to authorities, investigators found several photos that showed the two suspects naked with an undressed child.

34-year-old Cynthia Perkins and 44-year-old Dennis Perkins were arrested on October 23rd as a result of a criminal probe headed up the Louisiana Attorney General’s office. Dennis Perkins, who is also known as Denny, was a lieutenant with the Livingston Parish Sheriff’s Office Special Operations Unit (SWAT) before being terminated prior to his arrest. He was initially hired in 2002 from the Walker Police Department.

#BREAKING: Former Livingston Parish Sheriff’s deputy, Dennis Perkins, has been booked into the Livingston Parish Detention Center. He and his wife are accused of child rape and the production of child pornography, among other disturbing charges. @WAFB https://t.co/r9cTqpc8vc pic.twitter.com/DJD5lUtfmt

He is also charged with obstruction of justice after tossing his phone into a river in North Louisiana after finding out that investigators were there to take him into custody. Cynthia Perkins resigned Wednesday morning from her position as a teacher at Westside Junior High School.

The Louisiana teacher is charged with 60 counts of production of pornography involving a juvenile under the age of 13 and two counts of first-degree rape, she is currently being held on a $500,000 bond.

Those despicable people. A cop and a teacher. Two people who we automatically trust and respect. No excuse. They both should get the book thrown at them. Just throw the key away.

Sheriff Jason Ard from Livingston Parish stated it was a sad day for law enforcement officers after arresting one of their own. He noted, ?We at the LPSO work hard every day to retain the trust placed in us by our citizens. I understand this was a veteran law enforcement officer, one who had dedicated a lot of time and effort into this community, but as I have said in the past, no one is above the law. This type of alleged behavior will not be tolerated by me or anyone at the LPSO. I do not condone these alleged acts. I am disappointed. I have always considered Denny a friend and a family member. The Attorney General?s Office is leading this investigation. We are assisting and offering to cooperate in any way we can.?

Denny Perkins was initially booked into Sabine Parish Jail on October 22 on a charge of obstruction of justice. Attorney General’s office investigators then apprehended him while he was on a fishing trip in Toledo Bend. He was arrested again the next afternoon and transferred to Livingston Parish with a bond of $1,675,000. He was then transferred to Ascension Parish for his own safety. The number of children who may have been victims is not yet known, but an investigation is being conducted by the National Center for Missing and Exploited Children.