Some parents were unhappy when kids were banned from this restaurant, but business is now booming 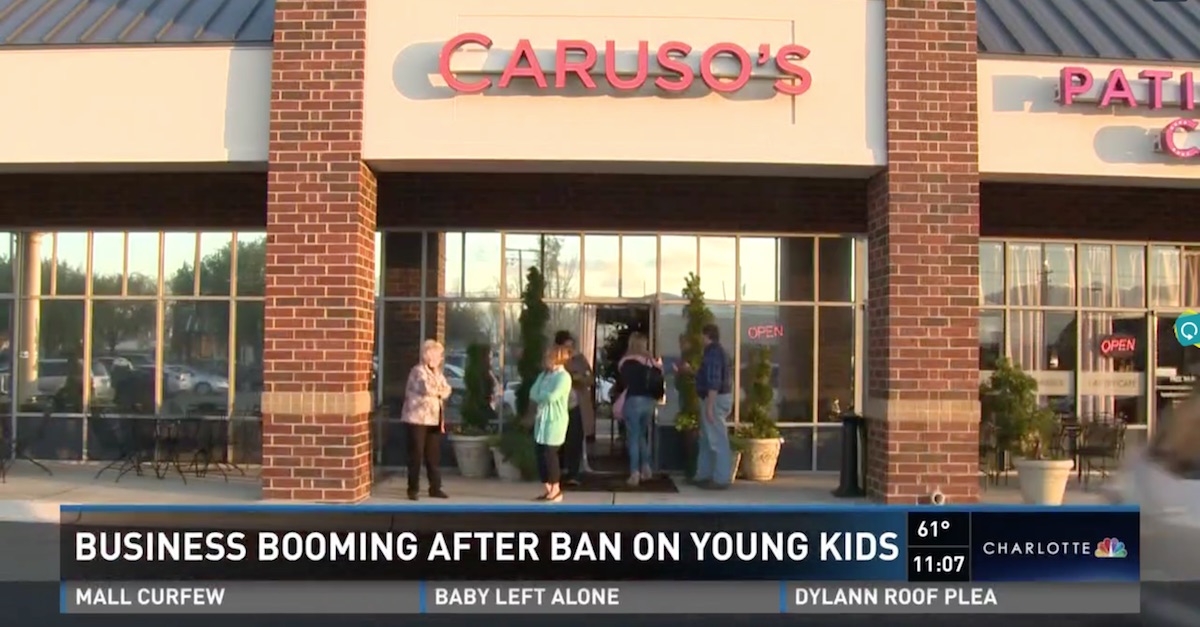 A Italian restaurant in Mooresville, N.C., that has been the object of ire for some and a breath of fresh air for others has declared that business is booming better than ever after publicly instituting a ban of children under the age of 5.

RELATED: A news reporter definitely wasn’t expecting this to happen on air when she brought her daughter to work

Restaurant owner Pasquale Caruso, a father himself, said that he didn’t decide on the ban because he dislikes kids, but because he wants to keep the restaurant atmosphere “elegant.”

“I have two children myself, so as a father, that’s not why I put the ban in place,” he told the Moorseville Tribune. “I try to please everyone, and create a nice atmosphere, keeping the restaurant elegant. I want it to be a place where couples and friends can have a nice evening out.”

Caruso said that of late he was “starting to lose money and customers, because [he] had very young children coming in, throwing food, running around and screaming,” and that he responded accordingly.

“I had several customers complain, get up and leave because children were bothering them, and the parents were doing nothing,” he added. “It started to feel like it wasn’t Caruso’s anymore, that it was a local pizzeria instead.”

The restaurant, which bills itself online as  “traditional, classy, intimate,” has seen a surge in reservations and positive reviews on social media.

Here is a sampling of those: The manger of the eatery, Yoshi Nunez, told The Washington Post that the straw that broke the camel’s back was a recent incident involving uncooperative parents.

A young girl was using an iPad at high volume and the parents did not turn it down when asked.

“Finally, we had to ask them to leave,” he said. “They were upset, but they didn’t seem to care about what the other guests thought. We tried to be nice about the situation, but we’re here to take care of customers, and we can’t tell a parent how to control their kids.

“That was the incident that triggered the entire thing,” he said.

Nunez would add, “Banning children has always been a topic in the industry, and every owner says, ‘I wish I could do it.'”

RELATED: A diner owner is sticking to her guns after the way she dealt with a crying 21-month-old child

“People don’t want to come in and spend money on a nice meal and an evening out, when there’s constantly food on the floor, loud electronic devices keeping kids entertained, and small children screaming,” Caruso said. “It was just the right decision for my business.”

What do you think of the restaurant’s policy change?