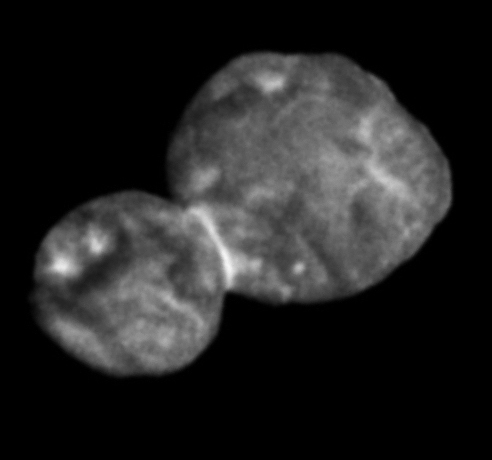 LAUREL, Md. (AP) — The newly visited space snowman — the most distant object ever explored — is now appearing in 3D.

At a news conference Thursday, scientists and others put on 3D glasses to see the city-size, two-sphered cosmic body in stereo, revealing possible curvy ridges. Ultima Thule, as it’s known, is still not showing any signs of craters, moons or rings.

Photos taken by NASA’s spacecraft New Horizons during a flyby earlier this week revealed that Ultima Thule (TOO-lee) has two reddish globes joined by a narrow neck, much like a snowman. It is 4 billion miles (6.4 billion kilometers) from Earth.

Brian May, an astrophysicist better known as a guitarist with the rock band Queen, created the stereo images released Thursday. He joined in the New Year’s Day flyby festivities at Johns Hopkins University’s Applied Physics Laboratory in Laurel, Maryland, home to Mission Control.

“The Prize!! For those of us who waited with bated breath for the Ultimate Stereo of Ultima Thule … here it is!” tweeted May.

Mark Showalter of the SETI Institute in Mountain View, California, said he expects to know within weeks or months, once better images arrive, whether Ultima Thule has any tiny moons or faint, narrow rings. He suspects there might be at least a couple moons a few hundred miles (kilometers) out. The data covering that area are still aboard the spacecraft, he noted.

As for impact craters, lead scientist Alan Stern said he’d be surprised if none turn up. If they are there, they will create a window into the interior “so they’re super valuable tools.”

For the next several days, data transmission will be halted temporarily because of the sun’s position smack between Earth and Ultima Thule, creating radio interference.

It will take nearly two years for all of the data to be transmitted to Earth, given the vast distance.

Ultima Thule is deep within the so-called Kuiper Belt, or Twilight Zone, well beyond the orbit of Neptune. In 2015, New Horizons first visited Pluto, which is barely in the Kuiper Belt, a full 1 billion miles (1.6 billion kilometers) closer to Earth.

Since Tuesday’s close approach, New Horizons is already 3 million miles (5 million kilometers) deeper into that mysterious region. It will keep pressing farther out, observing other objects from afar, and measuring dust and particles.

Stern hopes to get another mission extension from NASA, so another flyby can be arranged sometime in the 2020s.

In the meantime, he’ll come up with a formal name for Ultima Thule, to recommend to the International Astronomical Union, the deciding body. He acknowledged its current nickname may wind up on the short list.

“Everybody knows it as Ultima Thule,” he noted.