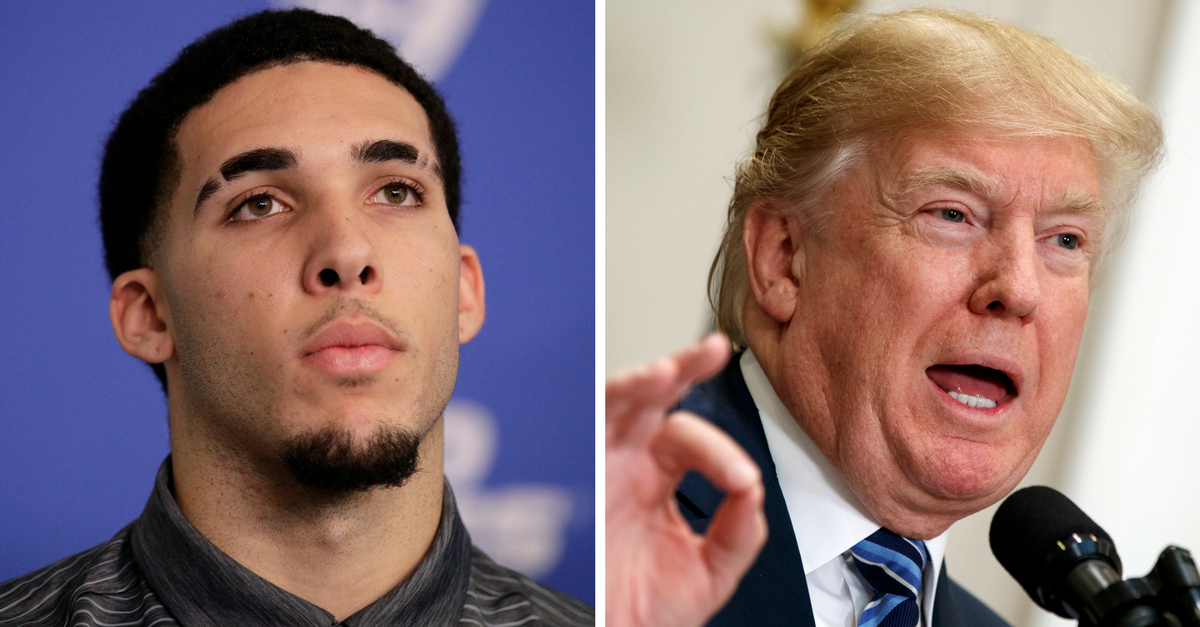 Left: AP Photo/Jae C. Hong, File Right: AP Photo/Evan Vucci
Left: FILe -In this Wednesday, Nov. 15, 2017, file photo, UCLA NCAA college basketball player LiAngelo Ball attends a news conference at UCLA in Los Angeles. The father of UCLA guard LiAngelo Ball says he's withdrawing his son from school so he can prepare to play in the NBA. LaVar Ball says his "grand plan" is for all three sons to play for the Los Angeles Lakers. LiAngelo told "Access Hollywood" in an interview aired Tuesday, Dec. 5, 2017, on the "Today" show that his UCLA suspension is "just a long time of doing nothing. I'd rather be playing."(AP Photo/Jae C. Hong, File) Right: President Donald Trump speaks during an event on federal regulations in the Roosevelt Room of the White House, Thursday, Dec. 14, 2017, in Washington. (AP Photo/Evan Vucci)

Former UCLA basketball player LiAngelo Ball says the university forced him to thank President Trump for helping secure his release from China after he was caught shoplifting with teammates.

“My school wanted to hear it,” he said in an interview with The Breakfast Club on Wednesday. “Before I went up there, it was like, ‘You’ve got to thank him.’ I just threw him in there real quick right before I gave my speech. If they didn’t tell me to do it, it wouldn’t have been in there, to be honest.”

Ball and two other players held a press conference last month following their release. While addressing their shoplifting incident, Ball said, “I would also like to thank President Trump and the United States government for the help that they provided as well.” His acknowledgement of the president’s assistance in saving him from up to ten years in a Chinese prison came after Trump tweeted, “Do you think the three UCLA Basketball Players will say thank you President Trump?”

The basketball player’s controversial father then stirred up a feud with President Trump with his response to the incident: “Who? What was [Trump] over there for? Don’t tell me nothing. Everybody wants to make it seem like he helped me out.” The comments elicited a two-part tweet from the president, in which he called LaVar Ball “ungrateful” and “unaccepting.”

RELATED: LaVar Ball is trying to find teams for his sons, and one club rejected them by hitting where it hurts

The pair have been engaging in an online spat ever since, with the basketball father literally slamming the president in an animated tweet as the latest development. On Tuesday, Ball pulled LiAngelo, 19, out of UCLA and announced that he and his youngest son LaMelo, 16, will be playing professional basketball overseas in Lithuania.