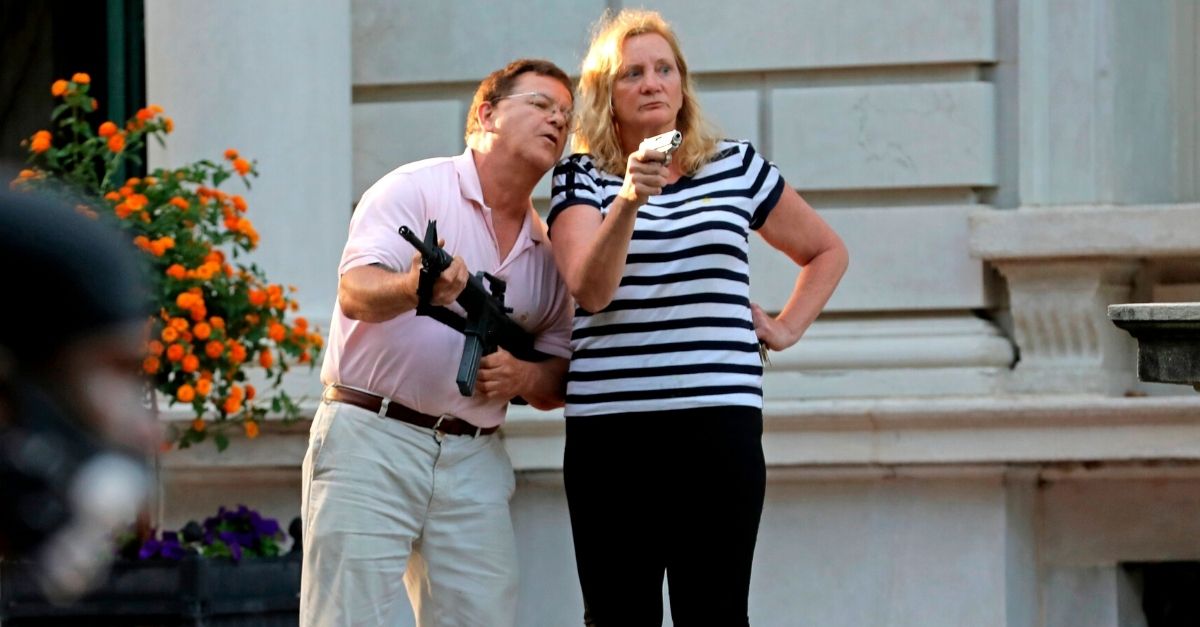 A white couple from St. Louis was charged on Monday for waving their weapons at a group of protestors. Mark and Patricia McCloskey are facing felony charges of unlawful use of a weapon as well as a misdemeanor charge of fourth-degree assault. St. Louis Circuit Attorney Kimberly Gardner spoke about the charges, stating, “It is illegal to wave weapons in a threatening manner at those participating in nonviolent protest, and while we are fortunate this situation did not escalate into deadly force, this type of conduct is unacceptable in St. Louis.”

Gardner stated she was open to “recommending” that the McCloskey’s, who are both personal injury lawyers, participate in a diversion program in order to reduce the unnecessary involvement with the courts. She noted, “We must protect the right to peacefully protest, and any attempt to chill it through intimidation will not be tolerating.”

Guns have been aimed at protesters in Missouri.
At one stage a man claiming to have been in Afghanistan challenges the female and another threatens to take the firearm from her. #9ACA pic.twitter.com/SvcEglH1r7

The armed homeowners were caught on video on June 28, showing Mark McCloskey seeing carrying an assault rifle, while Patricia McCloskey holds up a handgun as they stand outside of their home. The video shows the whole couple yelling at the peaceful protesters, who were marching to Mayor Lyda Krewson’s home and pointing the guns at them. Mark can be heard repeatedly shouting at the crowd” Private property!” While Patricia yelled, “Get out! Private property, get out!” Someone in the crowd is then heard yelling, “Calm down. “Then call the fuc***g cops, you idiot! It’s a public street.”

In the photos, Patricia’s finger can be seen on the trigger. Through an interview with KSDK, the husband stated he and his wife allegedly felt “threatened by the protesters, saying the crowds were “huge and frightening.” St. Louis police did note that the couple called the police for help when they saw the large crowd enter the Portland Palace. When the group began yelling, the couple felt threatened and grabbed their guns.

After being criticized for not sending state law enforcement officers to defend the couple, Missouri Gov. Mike Parson stated that the couple had “every right” to wave their weapons around at the protesters and he will “likely pardon” the couple if they are charged. He noted, “I think that’s exactly what would happen, I don’t think they’re going to spend any time in jail.”

Now, putting my two cents in here, I have to say this is just plain stupid. This privileged couple had no right to scare this crowd like this. In what mentality do they think waving weapons is a great idea? No. Unnecessary, reckless, and useless. This is the exact reason why the country is the way it is. Because people feel entitled to do whatever they want just because they have money. I’m glad these people were charged. Also, did we forget about COVID? Where are their face masks? Over it.