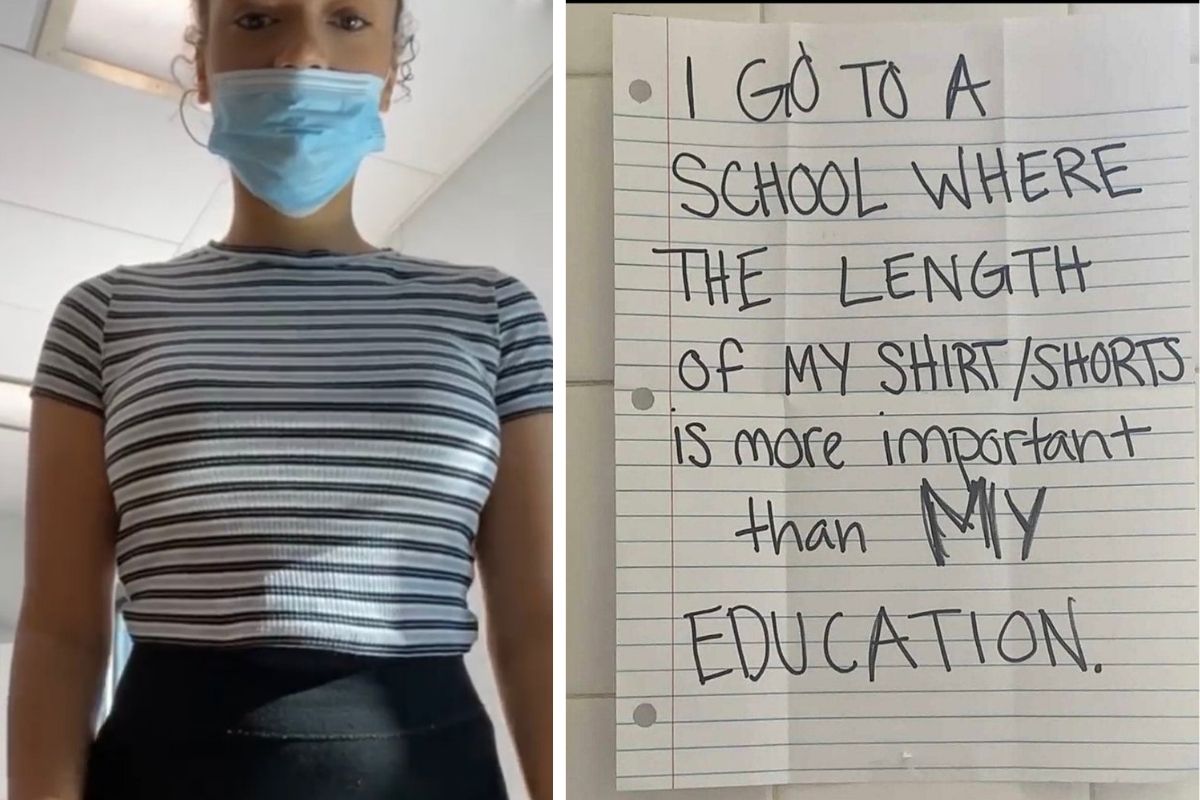 A dress code violation by a Pitman High School student sparked a protest of the Turlock Unified School District dress code policy on what can and cannot be worn to class, with some students claiming that there are rules and enforcement that are sexist and inconsistent. PHS Senior Olivia Millentree stated that she believed she was unfairly dress-coded for wearing a crop top and leggings. She refused to put on a t-shirt over her top to cover up which resulted in suspension and placement back from distant learning.

The High School Senior was then told that a return to campus will result in charges of trespassing, but she decided to come back to school at lunchtime in order to apologize for her actions. She was quickly placed under arrest by the campus school resource officer after refusing to leave.

High School Senior Wears A Crop Top To Class ? And Gets Arrested For It

High School Senior Wears A Crop Top To Class — And Gets Arrested For It https://t.co/H5be3DS2Q3

Millentree decided to post a video of her outfit on social media where students began to react and share their opinion on the dress code as well as their own experiences. Due to her suspension, she can no longer walk at graduation. Speaking about the situation Millentree stated, ?It made me feel targeted. I do regret going back on campus and I guess I shouldn?t have, but I really don?t regret what I did because I stood up for something I believed in… I?m sick of girls being sexualized or being a distraction toward boys, and I?m happy that there?s an outcome and other girls are starting to stand up for themselves.?

According to the school’s dress code, students cannot wear accessories that could be distracting during school hours such as gang-related attire, destructive body piercings, and saggy pants. The school also prohibits any see-through clothing, clothing that reveals a bare midriff or chest or clothes that expose the body in a sexually suggestive manner? as well as ?underwear-type sleeveless shirts, tube tops, halter tops, and spaghetti straps.?

Are Crop Tops and Cutout Dresses Too Revealing for High School?

The school also stated that skirts, dresses, and shorts that are more than 4 inches above the knee or form-fitting or tight around the body, such as bike shorts, are not allowed. Some of the students felt that the dress code unfairly targeted girls and is inconsistently enforce with several getting away with their midriff showing and others being sent to the office for it. Shortly after the incident an online petition and Instagram account promoting a protest against the dress code was created, which caught the attention of the school administration.

Pitman High School Principal Angela Freeman posted a Zoom Forum in which over 100 students attended, and told them that their feedback would be written down and sent to the Director of Student Services Gil Ogden. Several of the students asked for consistency and clarification on what is and is not allowed. TUSD Chief Communications Coordinator Marie Russell said that the district is aware of the dress code concerns as well as the student’s protests, saying that the school Positive Behavior Interventions and Support team, along with the participation from student, will work in order to update the dress code to ?promote dressing for success and College and Career readiness.?