Any Top Gun fan probably remembers Goose, the wingman to Maverick, and how he dies. In the movie, Goose dies from doing an inverted flat spin. Coincidentally, a stunt pilot tragically disappeared while filming the same exact trick for the movie. His name was Art Scholl, and his September 1985 death remains a mystery to this day.

In an interview with The Sun (no subscription, full story is recommended), Art’s wife, Judy, reveals that the accident blindsided her. Even though she was often present on-set, she was one of the last people to find out that evening.

“It was a day that nobody expected or anticipated,” Judy says. “He was very cautious and confident in preparation, checking equipment and making sure everything was in good shape… But then things still happen.”

Art had been asked to do an inverted flat spin that day, which would later be transposed via green screen behind actors Tom Cruise and Val Kilmer. They were filming out of Edwards Air Force Base in San Bernardino, California.

Initially, the shot was ruined because the observer plane was accidentally caught on film. So, Art was asked to try again elsewhere. He flew a couple miles away and then radioed that he was initiating the stunt. A mechanic and another stunt pilot in the observer plane saw Art’s plane start at about 4,000 feet. It was about 5:45 PM

That’s when things get weird. Judy says that “part way down [Art] radioed again saying, ‘I have a problem’ and then about three seconds later he said, ‘I have a real problem.’”

The observer plane searched for Art and never found his plane. They spotted oil and debris on the surface of the ocean, but never found anything that could piece together the puzzle.

Judy remembers the tragic day and how she was expecting Art to land. No one wanted to tell her over the phone. When she called the Carlsbad airport, she was informed that the crew was on its way back.

Judy says that “the other guys landed, and I couldn’t see Art’s plane anywhere… I took one look at them and I knew something really bad had happened… I said, ‘Where’s Art?’ and they looked at me and said, ‘Come on inside – we need to talk.’ There they just said, ‘He’s not coming home.’ And that was it.’”

Art was an esteemed stunt pilot and his career went way beyond Top Gun. He taught aviation for 18 years and he taught that same exact trick to hundreds of people.

Art’s plane and the observer plane were also equipped with safety equipment such as life vests and parachutes.

Bob Van Ausdell, a former TWA pilot, once noted that “something mechanical must have happened… An inverted flat spin was nothing for him. He’s done so many of those.”

The accident remains a mystery, Judy admits. “The NTSB, who do the accident investigations, determined it was special disorientation, but you can take that for what it’s worth… There’s never been a definitive answer for a couple of reasons — neither the airplane or Art were found, they were lost at sea, and there were no recording devices like airlines have.”

Top Gun: Maverick is set to release in the United States on May 27 after being delayed due to the pandemic. You can watch the official trailer here. 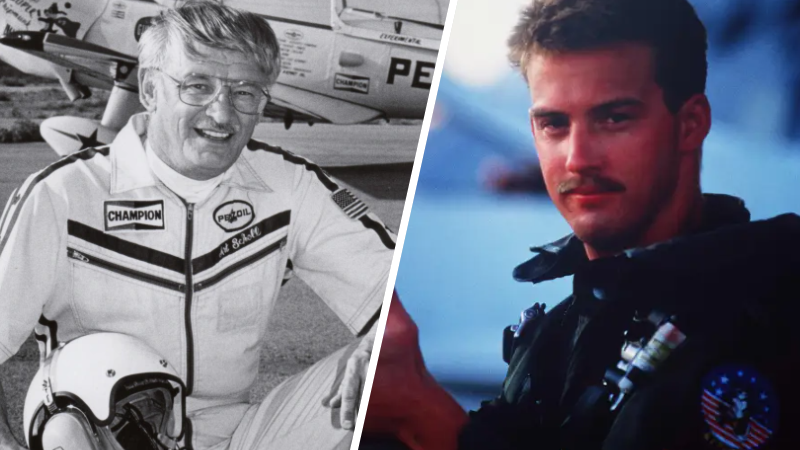