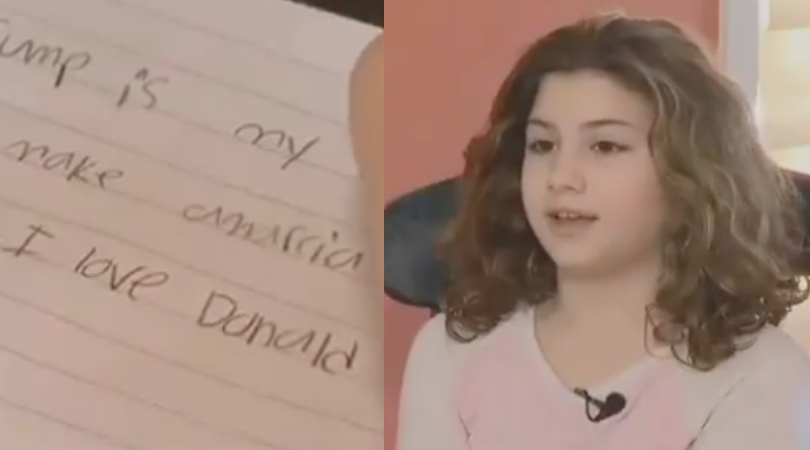 When the child decided to select Trump as her “hero” for her project this time around, Bella’s teacher immediately shut down her idea. The teacher claimed that Trump “spreads negativity and says bad stuff about women.” The teacher then allegedly chided the idea in front of her daughter’s classmates and a teacher. Bella told her mom that the teacher, who has not been named, also told her that President Barack Obama would be acceptable, instead of Donald Trump.

Sixth-grade student Bella Moscato was given a homework assignment where she was to write about who she considers a hero.

Bella and her parents say the teacher forbid her from picking Trump but let another student pick Obamapic.twitter.com/NN8D6XxcmP

As expected, Bella’s mother and father, Valerie and Arthur Moscato, rebuked the teacher’s decision during their last school board meeting. The couple believes the teacher’s actions amount to “intimidation and censorship”, claiming she violated her daughters First Amendment right to freedom of speech.

“My daughter’s hero is the president of our country. I can’t believe anybody at the school would tell my daughter that guy can’t be her hero. I’m incensed by this. My daughter has every right to do and pick a hero of her choice. It’s a First Amendment right, freedom of speech, freedom of expression.”

Sachem Central School District superintendent, Dr. Kenneth Graham, denied the allegations. Graham stated the child’s statement was not accurate since the student, by choice, was still conducting her project of President Trump.

In a document about the class assignment, Bella explained why she chose Trump as her hero, answering the question of “What positive contribution has this person made to society?” Bella wrote, “Donald Trump has helped millions of people by creating a great economy. He is fighting every day to protect the people from drugs crossing the border.”

And the free publicity might not hurt her career as a professional actor. https://t.co/yLwfqIjj2K

Now, although this is a ‘he said she said’ situation (as far as I can tell), I do have to put myself in the parents’ shoes. It’s hard to think about your child being persuaded to follow something they don’t want to. Especially if they hear it from an authority figure they have no power to fight.

But, then there’s the teacher’s side, where we actually don’t know if she actually said that to the girl or not. Also, I also want to point out that the 11-year-old has a full profile on IMDB, showing her acting credits. Which, the internet quickly caught on when learning about the incident calling the incident a hoax.

Bella Moscato for President for a day! https://t.co/ZDJaJw3578

Still, if it’s true or not, let this be a lesson to all. We all have different opinions, we all believe in wrong or right. Don’t try to force other people like you because you want them to believe the same thing you do. Let people live their lives and stop trying to convince each other who is the better party.

At the end of the day, we will all have different beliefs, so whether we like it or not, your opinion’s don’t matter because we are each going to follow what we believe. Give this 11-year-old an apology from the teacher, a trip to the White House to meet Donald Trump, and let’s call it a day.