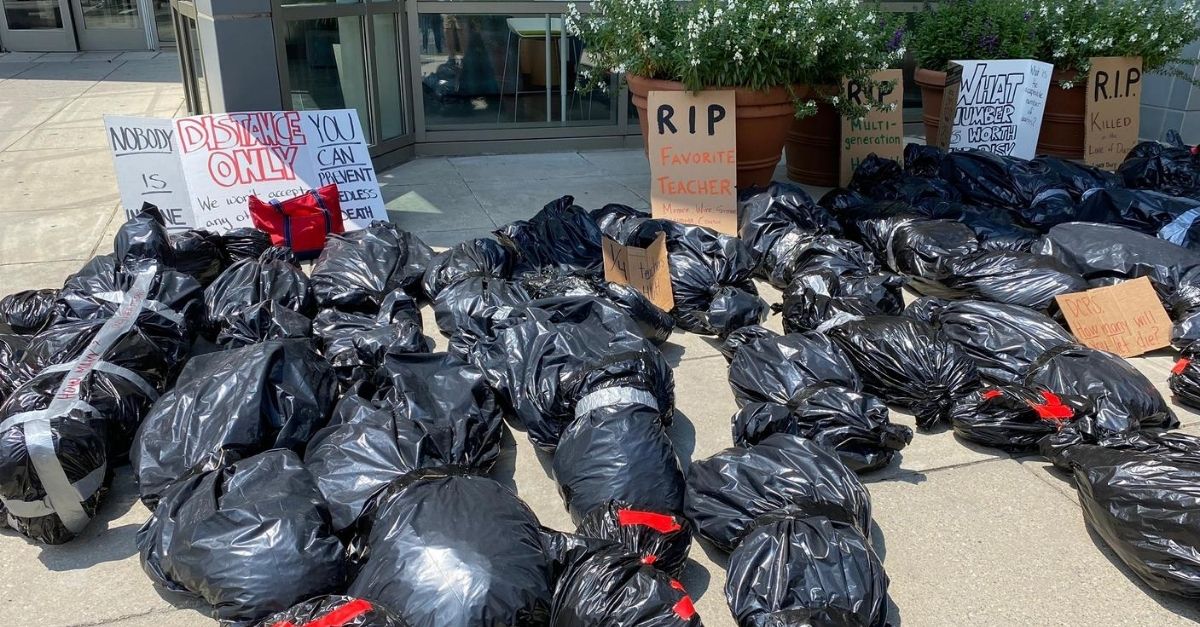 Public school teachers in Washington, D.C. have lined up fake body bags outside the school system’s officers to protest the return to the classrooms. Debbie Truong, an education reporter for WAMU 88.5, went to Twitter to post a photo of the bags outside. The filled garbage bags were tied with duct tape and places outside along with signs, reading, “RIP FAVORITE TEACHER.”

Mayor Muriel Bowser announced he will decide later this week if the city’s public school will partially reopen. Parents are asked to fill out a survey on the matter. As the start of the new school year approaches, there have been several arguments about issues of schools reopening around the country. Some believe the children are better off in the classroom since the death rates for children from the coronavirus are low, and the children are “unlikely” to transmit the virus to adults in their lives.

D.C Public Schools teachers briefly lined up “body bags” outside school system offices, protesting plans that could send them back to classrooms in the fall

Mayor Bowser is expected to announce if schools will partially open in the fall later this week pic.twitter.com/ARmqgkBfrG

That being said, others assert that the data on the transmission is still very unclear, nothing the safest thing to do is keep classrooms closed in order to protect both the teachers and the students. The Trump administration, along with President Donald Trump, has repeatedly pushed its desire for students to go back to school full time, with instruction to accommodate and prevent the spread of COVID-19.

Teacher unions across the US are objecting to push the return to in classroom instructions. According to the Daily Wire, there a number of the nation’s largest teacher’s unions who signed onto a “safe schools” pledge with outlines eight demands that must be met before members of the Boston Teachers Union, the Chicago Teachers Union, and other return back to work.

The demands include proper virus prevention measures, PPE, additional sterilization and cleaning, and social distancing. It also calls for the removal of community and police resource officers from school buildings, a tax on Wall Street and billionaires, and the end of charter schools, voucher programs, and private education. As of July 29, 2020, John Hopkins University & Medicine have recorded 4,375,217 coronavirus cases in the United States with a death toll of 149,684.