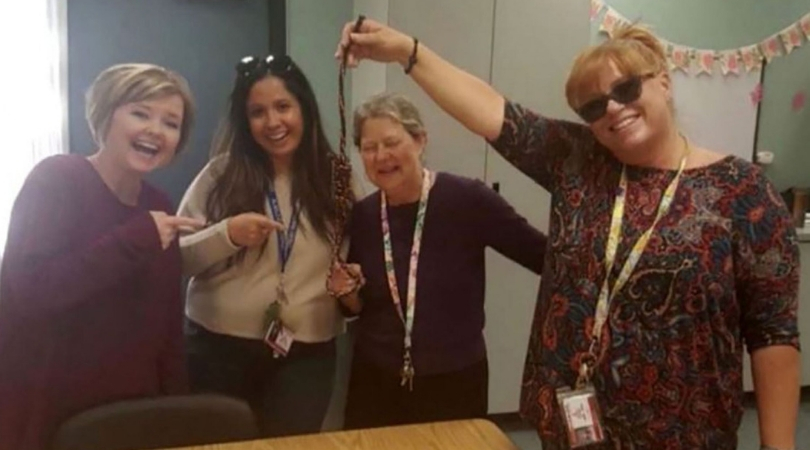 You know how sometimes you scroll through Facebook and then stop and see one photo and just go, “Oh God. Who told you that was a good picture to post?” Well…this is that photo. Four elementary school teachers and a principal in Southern California were placed on administrative leave after a photo of them SMILING while holding a noose circulated on social media. Yup, these women, along with the school’s principal, who reportedly took the photo, just didn’t think this one through. Clearly.

The noose, which was found by staff members, was hung from a tree outside Summerwind Elementary School in Palmdale. Some parents claim that someone shot video of the teachers laughing and joking around with the noose. Safe to say that an investigation into the photo and the origin of the noose is being conducted by the authorities.

This truly hurts my heart. The lack of human compassion is mind boggling. There was no reason to be posing for a picture with a noose other than showing how hateful & racist you truly are. https://t.co/zDwCXNvwZa

The principal, Linda Brandt, allegedly emailed the photos to other school faculty members along with a second image which featured the noose handing in an unmarked office. The picture eventually made its way around the internet, where it was found by parents, who are urging the educators to receive a much harsher punishment than just leave.

Superintendent of the Palmdale School District, Raul Maldonado, released a statement on Facebook acknowledging the incident, reading, ?As the Superintendent of Palmdale School District, I am appalled that this incident occurred. I am committed to the Palmdale Promise?s values of equity, integrity, and multiculturalism, and I know that most of the District believes in the same values the Promise upholds. We will not allow the hurtful actions of a few hold back our District?s pledge to do right by our community.”

Which I mean, sure, you can release as many statements are you want, but it doesn’t erase the picture or the fact that they joked around with it. Parents were so upset about the photo that they are either permanently or remotely pulling their kids out of school. Because, well, can you blame them? Heck, I’d be terrified too! I wouldn’t want my child to see this photo and think nooses are okay!

No, ma’am, this type of behavior is not acceptable! These women seemed to forget that nooses are highly offensive and the fact that they are teachers. Children look up to them, and they have so much power. Don’t even get me started on the school principal, because that’s just ridiculous.