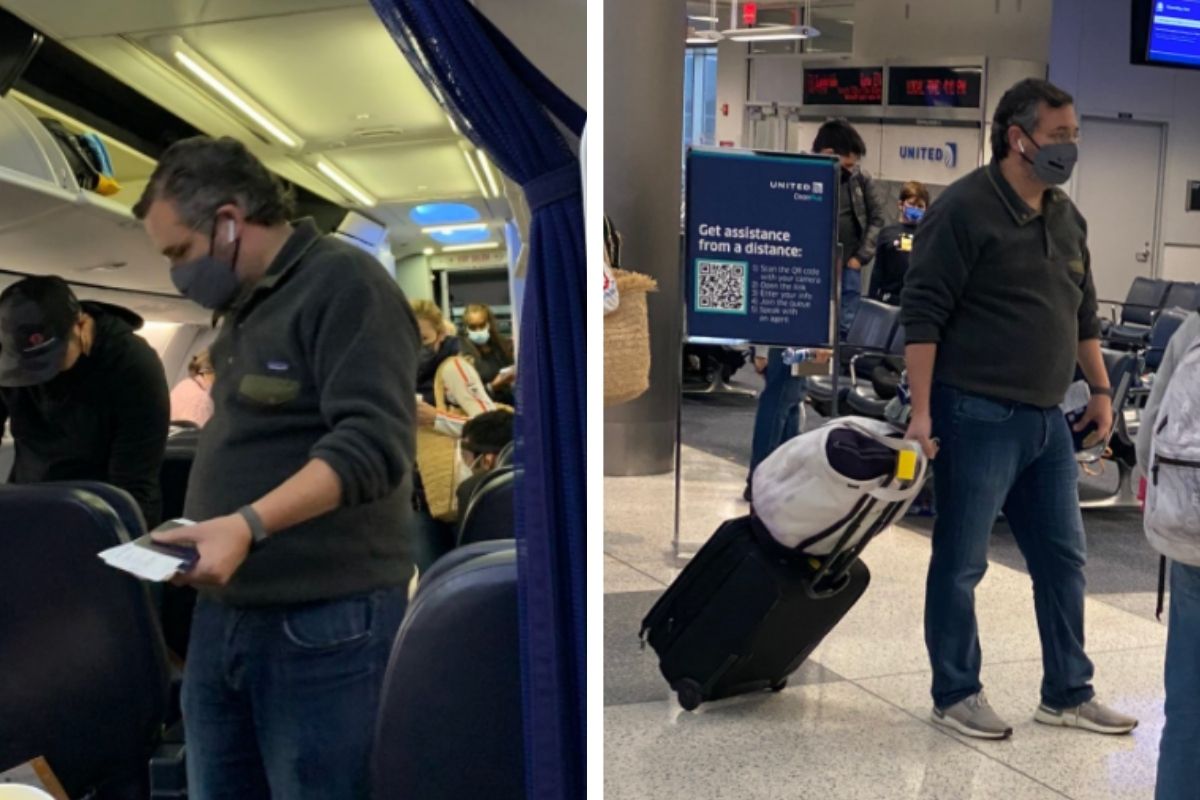 Sen. Ted Cruz has been taken down by the internet after it was found that he was traveling to Cancun, Mexico, despite the power outages that have been taking place across the entire state of Texas, causing many to go into survival mode without proper preparations. Apparently, he was only planning to fly them down and then return to Texas the next afternoon, but many are doubtful of how actually true that statement is.

On social media, especially Twitter, pictures of the Texas Republican senator at an airport and on an airplane Thursday morning have been circulating. Releasing a statement immediately by Thursday afternoon, Cruz said, “With school canceled for the rest of the week, our girls asked to take a trip with friends. Wanting to be a good dad, I flew down with them last night and am flying back this afternoon.”

However, with the insane winter storm that hit America’s south and mid-sections, and Houston and Austin areas suffering the worst of it, many Texans didn’t really want to hear about the senator trying to be a “good dad” while his home state was in the condition it’s still currently in. Cruz also claimed that he and his staff are in “constant communication with state and local leaders” in trying to understand how to manage the state-regulated power grid to help those in desperate need.

Former MSNBC anchor David Shuster tweeted the pictures with the caption, “Just confirmed @SenTedCruz and his family flew to Cancun tonight for a few days at a resort they’ve visited before. Cruz seems to believe there isn’t much for him to do in Texas for the millions of fellow Texans who remain without electricity/water and are literally freezing.”

GOP Sen. Ted Cruz on a Plane from Texas to Cancun

Just confirmed @SenTedCruz and his family flew to Cancun tonight for a few days at a resort they've visited before. Cruz seems to believe there isn't much for him to do in Texas for the millions of fellow Texans who remain without electricity/water and are literally freezing. pic.twitter.com/6nPiVWtdxe

And Keith Edwards, former senior digital advisor to Senator Jon Ossoff’s campaign, claimed his own confirmation of the rumor, tweeting, “Ok, at first I didn’t think this was Ted Cruz, but this person has the same mask as the senator. Did Ted Cruz fly to Cancun today during his state’s emergency?” and along with pictures saying, “I now have multiple people DMing me, confirming he was on their flight to Cancun today.”

I now have multiple people DMing me, confirming he was on their flight to Cancun today 👀 https://t.co/B6aikULyZ6

According to CNN, the pictures are from a 4:45 p.m. United Airlines flight from Bush Intercontinental Airport in Houston to Cabo. And while many are arguing when the pictures were from, millions of people are still having to suffer blackouts from the winter weather. Cruz also mentioned in his statement that this is an “infuriating week” since the “greatest state in the greatest country in the world has been without power.”

He said, “We have food lines, gas lines, and people sleeping at the neighbors’ houses. Our homes are freezing and our lights are out. Like millions of Texans, our family lost heat and power too. We want our power back, our water on, and our homes warn. My team and I will continue using all our resources to keep Texans informed and safe.”

Meanwhile, Beto O’Rourke, the politician representing the Texas Democratic Party who lost the 2018 campaign for U.S. Senate to Cruz, has been incredibly busy. According to his Twitter, he has been helping hundreds of thousands of people get connected to help through phone lines, using his platform to encourage others to do the same.

Beto O’Rourke Working to Help Those Affected by Winter Storm

We made over 151,000 calls to senior citizens in Texas tonight. One of our vols talked to a man stranded at home w/out power in Killeen, hadn’t eaten in 2 days, got him a ride to a warming center and a hot meal. Help us reach more people, join us tomorrow: https://t.co/WOLn2HCrm1

Politics will continue to be dividing, especially after the presidential election between former President Donald Trump and new President Joe Biden. However, regardless of who’s in the White House, now couldn’t be a more important time to show as much love, grace, mercy, and kindness to all around. Many people still really need help, and while this blizzard strikes Texas and surrounding areas, we’re also still at the mercy of the pandemic.

So, it really doesn’t matter if this was a Democrat, Republican, or whatever-party politician. No one wants to see your family vacation trending worldwide on the internet while people are losing their lives.