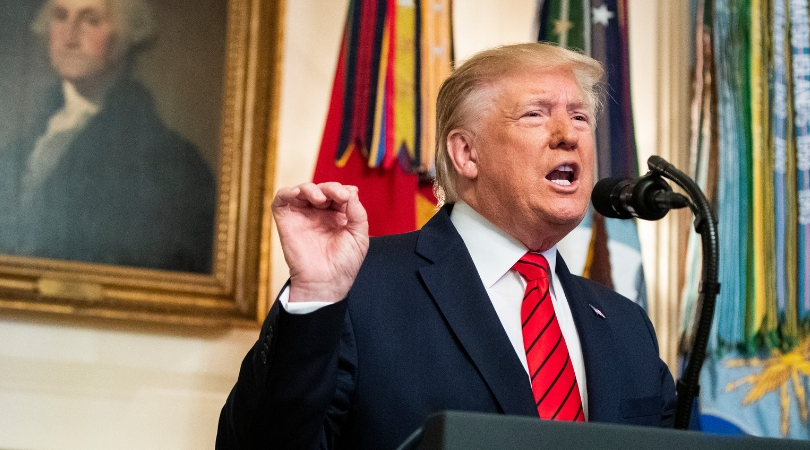 It looks like President Donald Trump has been trending all weekend…but for the wrong reasons. Not only was he recently booed by thousands of people at the World Series, but a 14-year-old girl decided to get physical and punch a man dressed as Donald Trump. So, okay, it wasn’t necessarily a physical hit at him, but it was sure a big metaphorical punch at him. That’s for sure.

According to authorities, the man was standing in line at the Collier County fairgrounds. The girl then quickly approached him and allegedly punched him while her friends recorded it. Because well, a 14-year-old really has nothing better to do. The Collier County Sheriff’s Office stated the girl is now facing a misdemeanor charge of battery for the incident.

The arrest report indicated that the man and his family were in line to go into a haunted house exhibit when the girl walked over to him and gave him a taste of his own medicine, right in the jaw. The man said the girl laughed and then ran back to her place in line with four other teenagers. The man quickly approached her and asked why she had punched him before finding a fair worker and asking for help from the Sheriff’s deputies.

Probably not good idea to dress up like Trump for Halloween….Deputies: 14-year-old girl punches man dressed as Trump at Collier fairgrounds https://t.co/W01dbQF0tm via @winknews

Deputies quickly questioned the girl and her parents, when a woman identifying herself as a Collier County school system employee stated the incident was posted on Instagram. The deputy told the family that due to the nature of the crime and that the sole motivation was for the girl to “strike Trump,” investigators may follow-up with them later. The victim told authorities that he indeed wanted to press charges, which kind of seems a bit over the top since I’m sure that punch was anything from painful..

Still, should this girl have punched the man for wearing a Donald Trump costume? No, of course not, that’ just dumb. Wear whatever you want without feeling guilty. But she’s 14-years-old, this kid didn’t even think about the consequences. Give her a slap on the wrist, a warning, and scare her a little bit. But, I guess it just goes to show you how much Trump’s presence is affecting not only adults but children and teenagers as well. Hey parents, leave your kids out of politics, will ya? At least no one was seriously hurt.