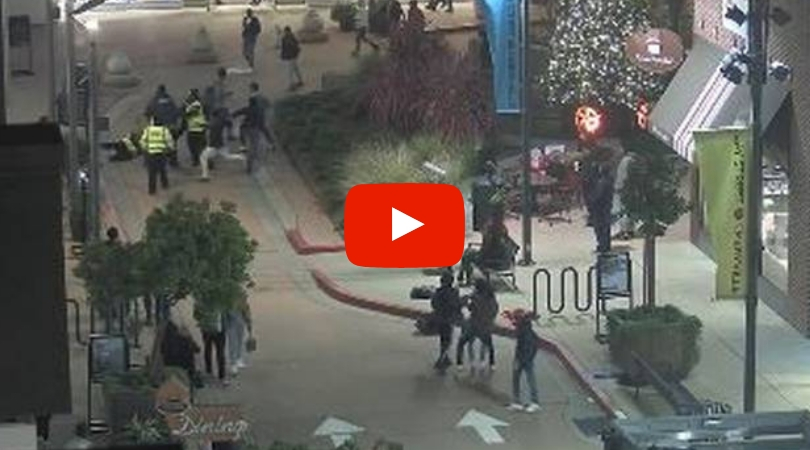 An off-duty California officer was attacked and choked unconscious by several teenagers after he tried to help a woman the group was assaulting. According to authorities, the incident occurred on Black Friday, outside the Bay Street Mall in Emeryville, 4 miles northwest of Oakland.

Emeryville police stated a woman returned to the mall and confronted the group of teenagers who she believed knew who had stolen her cell phone earlier in the day. While asking them to give back her phone, the group became aggressive and began to assault her.

Surveillance video of the incident shows the woman approaching the group of at least five teenagers and grabs the boy wearing a shirt hoodie by the arm. He reacts by shoving the woman as several others gathered around her. The teen in the white hoodie shoves the woman again before someone is seen running over to intervene.

That’s when some of the teenagers are seen running off, as the individual in the hoodie appears to get angry, and begins to fight the police officer who went to help the woman. Several teens can be seen beating the man, even though he’s on the ground. The teen then runs from the group as mall security officers try to break up the brawl. The man is later seen lying on the ground, eventually getting up a few moments later.

Authorities stated the man who intervened was indeed an off-duty California Highway Patrol officer. After he tried to intervene and help, the juveniles became aggressive and began to “violently assault him.” Emeryville police stated the teenagers, “struck the Off-Duty CHP Officer multiple times and choked him unconscious.”

Luckily, the officer regained consciousness and used pepper spray on the teenager who was still assaulting him. Emeryville police detained several of the teens and arrested a 14-year-old and a 16-year-old for suspicion of assault. The off-duty officer managed to drive himself to the hospital where he was treated for his injuries.