Teen’s Jaw Shatters After E-Cigarette Explodes in His Mouth 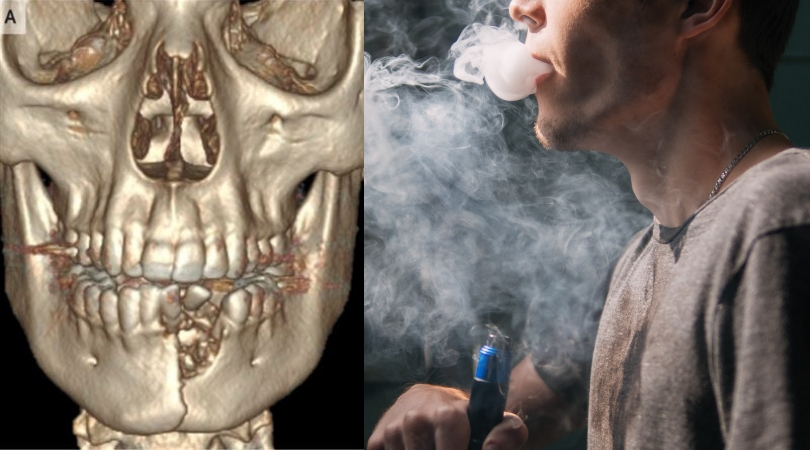 A 17-year-old traveled more than 200 miles with broken teeth, a bloody mouth, and a hole in his jaw, as he made his way to a pediatric hospital in Utah with his mother. After examining for multiple hours, pediatric surgeons rushed the teen into surgery, to try to reconstruct and repair shattered bone.

Austin Adams was allegedly vaping when without warning his e-cigarette exploded in his face. Doctors stated the boy had suffered a punctured chin and several cuts across his mouth. Several of the boy’s teeth were also damaged, and his lower jaw was fractured. Doctors were able to remove some of his teeth and damaged tissue, constructing a wire used to heal his fracture and attaching it in his mouth. Surgeons needed to sew his gumline back together then put plates on the jawbone to stabilize it, and needed to be wired shut for six weeks meaning he could only have liquids and puree food.

According to Dr. Katie Russell, a pediatric trauma surgeon at the University of Utah and Primary Children’s Hospital, the boy’s injuries were ones they usually see when someone is involved in a high-speed motor vehicle crash. Several were shocked since it usually takes a serious amount of force to break a jaw, which is why they found it off that an e-cigarette managed to hurt the teen the way it did.

This teen's mom purchased him a vape to ween him off of cigarettes. His first go around with the vape the dang thing exploded. He suffered extensive wounds to his mouth, several missing teeth, and a broken lower jaw. https://t.co/RdZkkPYVzz

Six weeks after the incident, Austin is recovering well and they managed to remove the wire. Austin’s mother, Kailani Burton, said the vape pen was supposed to “improve her son’s life” after he began smoking it in 2018, in hopes it would help him quit smoking. According to the Center for Disease Control, e-cigarettes have become more popular in recent years. The percentage of high school students who used e-cigarettes or vapes has skyrocketed from 1.5 percent in 2001 to 20.8 percent in 2018.

According to a recent study, experts found that from 2015 to 2017 there was an estimated 2035 e-cigarette explosion and burn injuries reported in emergency rooms across the US. The teen’s accident comes after a Texas man died in February after his electronic cigarette exploded and shrapnel tore his carotid artery. Part of the device was lodged in the man’s throat. Medical staff stated the accident involved “mechanical mods” which are large vaporizers that have more powerful batteries than your typical vape device.

In an effort to tend such accidents, just last week the Food and Drug Administration finalized guidance for manufacturers who are submitting new applications for tobacco products, including e-cigarettes. The FDA recommends companies provide detailed information about the kind of batteries they use, as well as plans for addressing overheating, fire, and explosions. Usually, E-cigarettes explode when the lithium-ion battery inside a vape pen overheats.